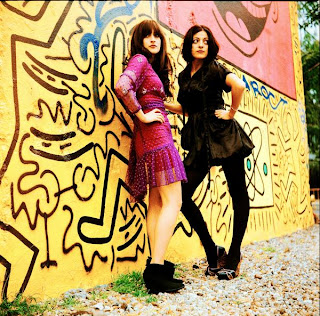 Based out of New York come Zambri, a five piece who look set to smash the underground pop scene in 2010. Originally formed by sisters Jessica and Christi Jo, and later joined by Chris, Andy, and Carrie, the band already have a well received self titled EP under their belt, as well as appearing at the inaugural SXSW and CMJ events.
From The Starts is a dark, slow tempo track that has haunting vocals which drift over the bleak soundscape of swirling synths and distant bass and drums. It's a song which captures your attention due to the pure eeriness the band create whilst maintaining a real sense of passion and meaning through their vocals. Similarities can be drawn with bands such as The XX, Kate Bush, Yeah Yeah Yeahs, and Bjork.
Zambri are currently working on material for their debut full length album, and you can expect a full American tour next year. I personally reckon this style of underground pop is going to explode in 2010, and Zambri are certainly one of the bands to look out for.
DOWNLOAD : MP3: Zambri - From The Starts
www.myspace.com/zambri
>>> In other news Music Liberation has been featured in Indiescreet's 10 Influences On Your Taste In Music In 2010 article. It's always nice to get an appreciative nod from fellow bloggers, so we are pretty chuffed at getting a mention. You can check the full post out here. <<<
MP3's New Music Zambri