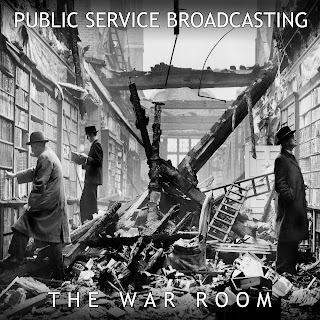 'The War Room' is a 5 track debut EP from Public Service Broadcasting, the moniker for duo J. Willgoose, Esq, and Wrigglesworth (yes, real names!). The EP is the follow up to their first single 'Roygbiv', which came out during March of this year, and is released through Test Card Recordings on 28th May.

The new record brings together a rather eclectic mix of samples from old World War Two propaganda films, which are put over the top of a part rock, part electronica sound scape. The songs are powerful and thought provoking, with the subject matter of war cleverly given focus through the use of vocal commentaries. 'Spitfire' in particular epitomises the EP, with swirling synths and drawn out guitar solos over which clips and quotes are interspersed about the famous plane in question. 'Dig For Victory' sounds huge with far flung atmospheric vibes throughout, transporting you to another world, whilst 'London Can Take It' will certainly invoke emotions for those who have or are currently living in the capital.

Final track 'Waltz For George' has sentimental values, with J Willgoose. Esq's great uncle, George Willgoose, remembered through the use of his original banjolele during the track. The EP as a whole is dedicated to his memory, for the man who died during the Battle of Dunkirk in 1940 aged just 26.

Aside from the music there are also visuals to go with it, as the old war films are chopped up and spliced together to fit and enhance the music, with 'Dig For Victory' a fine example of this, adding yet more depth and dynamic to this fine project.

'The War Room' EP is a bold and exciting project undertaken by Public Service Broadcasting, taking a subject which is not often covered in pop music, which both shines the spotlight upon them and increases the pressure to succeed somewhat. However the results are good, with the 5 track  record showing much promise and application, whilst somehow maintaining an air of nostalgia and ear for the future. It will be interesting for those who already have a knowledge of World War Two in Britain, but also for those of a younger generation who may not be so informed. Aside from the vocal content the music itself is powerful, with the energetic and varied synth/drum/guitar combination working really well.

You can listen to the full EP here. // Public Service Broadcasting