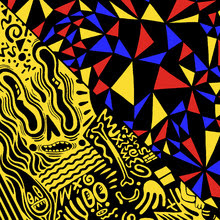 Negative Pegasus, or “Neg Peg” as fans should, and most probably are, calling them are three mad scientists from Brighton, mixing together the phatest, scariest beats you’ll hear this side of the English channel. And like the Frankensteinian monster it is, debut album ‘Looming’ wanders around, clumsy and aimless, smashing the shit out of anything in its path; mostly, your ears.

It’s a giant of a record; greater than the sum of its rackety and screeching parts, greater even than the crazy trio that fused it all together in a seaside lab full of smoking, bubbling liquids in glass beakers. The twisting, rich guitar riffs dance around horrendously huge staccato rhythms in some kind of punk / dance insanity that that gives zero fucks to what genre it may or may not fit into, whilst echo-drenched vocals occasionally wail out between the ensuing carnage. 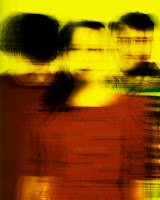 Look, whatever, it’s stunning. Words are limited, music is infinite and this is one of the most exciting records in years. It it self indulgent? Yes. Is it inaccessible? Most probably. Is it genius? No doubt. Think Holy Fuck. Think Sleigh Bells. Think World’s End Girlfriend. Think about every electro-punk-rock crossover that you’ve had the displeasure of hearing and then listen to an entire genre being saved by an epic, breath of fresh air that is this album. Inspired, passionate, adventurous and uncompromising, music really doesn't get much better than this.

The aptly named ‘Looming’ will be released by Small Town America, home of some of the best guitar bands of recent years, on 24th September 2012. It is highly advised you buy it.