We recently put forward Esper Scout for the Emerging Talent Stage at this year's Glastonbury Festival, along with Moats, and Voices. We thought it would be a great idea to find out a little more about them, so we spoke with Sarah, Kirsty, Rebecca, and Lou from the band.

To view the full long-list of 120 acts that made it through to the next stage of the competition, as well as all the blogs that took part in the voting process, head over here. Q1. Congratulations on getting through to the next stage of the Glastonbury Emerging Talent stage! What made you apply for this competition? How do you feel about making it through?

Sarah (guitar, vocals): "I was spurred on through separate recommendations from two of our friends who are both passionate about the band and love Glastonbury. I didn’t tell the rest of Esper Scout and so finding out that we’d been selected for the long-list was an extra surprise for them!"

Kirsty (guitar): "Obvious to say we’re flattered! It feels like we’ve been working hard recently and it seems to be paying off. This is a really great opportunity, even if it just means that one or two extra people hear about us."

Q2. Where are you guys from? How did you meet? 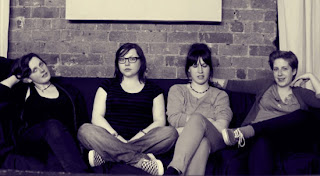 Sarah: "We’re based in Leeds but Kirsty, Rebecca and I were born, raised and met in Manchester, actually our town is appropriately called Bury. Me and Kirsty ended up sat next to each other on a school coach trip to Germany and shared mix tapes. I’ve never realised before how poetic that could sound and I guess it is! When we got home I decided to pursue drums and she picked up the bass and guitar." (ED: aww that's awesome!)

Kirsty: "Yeah, at first it was just so you’d have someone to play with. Turned out alright."

Sarah: "Thanks for doing that! How I ended up singing and playing guitar in a band I’m not quite sure. After some ‘can I/can’t I?’ deliberation in the beginning I feel that something’s definitely started clicking between the four of us over the past year and writing and self-demoing for our mini-album which we’re recording in Spring has given us an injection of confidence."

Rebecca (bass): "Yeah definitely. The three of us moved up to Leeds in 2008 without much of a plan and met Lou through the city’s network of musicians. We’ve been writing and playing together since then but Esper Scout only came in to being a couple of years ago through changes in line-up and finding a collective and better focused mind-set."

Lou (drums): "‘Loud/Quiet/Rock’ says everything about us and nothing at the same time."

Q4. Who are your musical and non-musical influences?

Sarah: "I think you can hear reflections of dynamic, melodic guitar and drum driven bands like Thrice, Silversun Pickups and Alexisonfire in our songs. My most prized possession is a ‘Rap Band’ beatbox machine which plays half a dozen electronic drum patterns depending on what buttons you press. An Uncle bought it me for Christmas when I was six and apparently I sat there for days pressing different combinations of three buttons which, as much as they say they were happy for me, must have driven my family and their friends a bit bonkers."

Lou: "I never looked up to anyone in particular when I started playing as much as I think I just felt a natural draw to drumming; a compulsion to build and elaborate on beats. I found out that my Granddad used to play and he was a well-respected man which inspired me to keep on at it through admiration for him."

Rebecca: "What we seem to have in common is that we all found an interest in sound before we identified specific music or artists we liked. Non-musically, seeing injustice and imbalance when it comes to female rights first motivated me to pick up the bass. From a young age I felt strongly about women becoming as empowered as men and it made me realise how important it is to have your voice heard which in turn has influenced me artistically and expressively."

Kirsty: "We’ve been asked to play Not Woodstock festival in Northumberland which is taking place at Featherstone castle 3 miles south of Hadrian’s Wall. Me, Rebecca and Sarah are visiting the USA’s West Coast in May and we’re hoping to play a bit whilst we’re out there. Open mics, guitar shops, wherever will have us!"

Lou: "We’ve just finished demo-ing our mini-album so after recording the six songs properly in the studio we’ll be busy with mixing and all the other things associated with a release such as videos, singles etc. Most importantly we’ll be playing some gigs in support of them, including a week down south which we’re excited about."

Q6. Any new bands/artists you recommend us checking out? 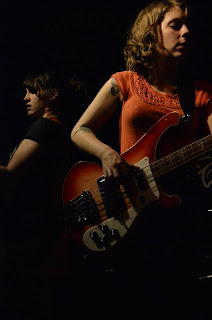 Sarah: "With us being based in Leeds you don’t have to look far to find great bands. Festivals like British Wildlife, which takes place at the Brudenell Social Club, and Live at Leeds, show just how high the quality of music is in the city is, both in terms of ideas and passion. Bearfoot Beware, ENVOYS, British Racing Green and Insatellites, for example, who are all currently working on exciting things. We’re really lucky to be able to be part such a well-connected and encouraging community of musicians, videographers, writers, graphic artists and illustrators etc., the coming together of which is aided by the newly opened Leeds Music Hub which is quickly becoming an invaluable resource."

Rebecca: "There are always at least three or four decent gigs a week across a wide scope of genres. Venues like Wharf Chambers and the Brudenell are really passionate about the bands they put on and how they treat audiences."

Lou: "We recently invited our friends Kassassin Street from Portsmouth to play with us and they are one of the best live bands I’ve ever seen. We wouldn’t be surprised if they did well for themselves this year."

Q7. If you could tour with any two artists, past or present, who would they be and why?

Kirsty: "It’s been a dream of mine for ages to tour with the Bloodhound Gang around Europe on their party bus. We’d need to bring some ear defenders and eye mask for Lou. The girl’s gotta sleep."

Lou: And a cycle helmet so nobody shaves my hair off. Nobody wants a Lou with a head-chill!

Q8. What 3 things would you have on your perfect tour rider?

Sarah: "I think I can speak for myself and Reb when I say porridge oats and marrowfat peas. Those actually might be a pain to prepare without a hob, so that’d be my third request. Am I asking too much? I’ll probably bring my own camping stove then, and a pan."

Rebecca: "Add bananas to the porridge and you’ve got yourself a treat for any time of day."

Lou: "Clean socks, a book of arrow-words and Diet Coke."

Kirsty: "Beer and twiglets. We chose more than three but on average less than three each if that counts."

Q9. Aside from the world of music, what do you get up to?

Rebecca: "Some of us get out cycling and running along Leeds-Liverpool canal and the forest near our base in Leeds. A bit of travelling too, when time and funds allow!"

Q10. How can we find out more about you?

Sarah: "Our main site is www.esperscout.com for news and music, with all external links accessible through icons at the top of the page."

Many thanks to Sarah, Kirsty, Rebacca, and Lou for taking time out to talk us here at Music Liberation. We wish them luck in the next stage of the competition!