Posted by Jon Sidwell on December 03, 2008
This week's interview is with Justin Levy from Eureka Birds, who are a melodic indie rock band from Baltimore. 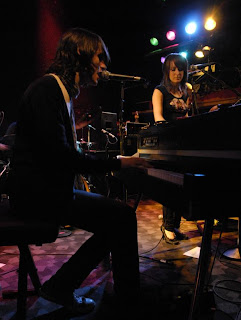 Q1. Describe your music in three words?
Totally. Awesome. Music.
Q2. Who are your musical and non-musical influences?
Non-Musical influences would be Kurt Vonnegut and Edgar Allan Poe.
Musical influences at the moment would be Dancer vs Politician, Kaiser Cartel, and Fredrik because they're making great music and just getting started. I see them doing what we'd like to do in the next 12 months. I'm also a huge fan of Nick Drake, the Beach Boys, Rufus Wainwright, Sigur Ros, the Beatles, and Radiohead, just to name a few.
Q3. What's on your agenda for the next 12 months?
We will begin recording a music video for "Oh! My Dear" in December & we're very excited about this. It's going to be partly filmed with a 1920s theme & partly animated. Also, we hope to get some kind of EP & tour together in late winter or early spring in addition to playing more Baltimore shows. Unfortunately, these endeavors cost money, so I need to find a new job. I was just laid off from the scientific world.
Q4. What role do you think bloggers have in the current state of the music industry?
Bloggers are the discriminating ears of the music world. Major and Indie labels are getting thousands and thousands of unsolicited CDs sent to their door and most have said that they don't accept demos. I'm not saying these labels are in the wrong either. They're a business just like any other and I'm sure they can't hire enough people to listen to everything they get. This is where the bloggers come in. Many of them have connections to those higher powers and can function as A&R reps to labels that would otherwise miss out on a good band. Bloggers also give listeners a chance to hear things those labels are keeping from your ears (man)! 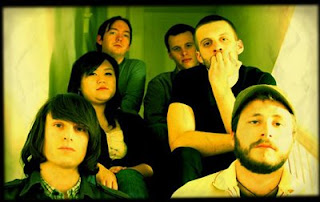 Q5. Any new bands/artists you recommend checking out?
Dancer vs Politician, Kaiser Cartel, Fredrik, Perkasie.
Q6. If you could tour with any two artists, past or present, who would they be and why?
I would have liked to tour with the Decemberists on their "Her Majesty" tour because in my honest opinion that's when they were making magic happen. And, of course, we'd have WHAM! opening up the show, because they always bring the party time. 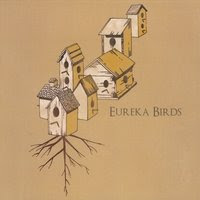 Q7. You have unlimited funds, what 3 things do you have on your tour rider?
We have every Wes Anderson film and a comfortable couch. We also have the galaxy necklace the cat wore in Men in Black.
Q8. What's your perfect sandwich?
It has avocado, fakn' bacon, lettuce, sprouts, tomato, vegan mayo, mustard, on rye. It would be best if Liquid Earth (a Baltimore restaurant) made it for me.
Q9. If Music Liberation was an animal, what would we be?
Definitely a dinosaur. [ED: Is that good or bad!?]
Q10. How can we find out more about you?
www.myspace.com/eurekabirds You can also stalk us or me (Justin Levy) on facebook. Please say hello.
Thanks to Justin for answering Music Liberation's questions, be sure to check out his excellent band. Next week we have an interview with Laetoli Steps.
MP3: Eureka Birds - Goodbye Space And Time
Eureka Birds Interviews MP3's