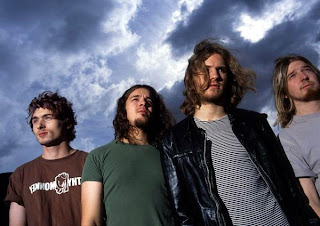 “Recorded by Steve Albini – Play loud” are the instructions emblazoned on the cover of ‘Slug’ so prominently that Kingskin obviously want to ride on the shirt tails of their producer’s credibility. True, he is a musical icon but pay him right and he’ll produce anything. Hell, you can hire him on his own website for around $400 a day.
This point hits home when listening to Slug as it's quickly apparent this ‘aint gonna be no In Utero. Part stoner rock, part funk, mostly pseudo grunge, this second offering by Kingskin is a pedestrian mix of any sound-a-likes you want to choose from the heady days of early nineties rock; Corrosion of Conformity, The Almighty, Spin Doctors and Skin to name but a few.
There’s no getting around the fact that this album sounds dated. Of course this doesn’t immediately qualify it as mediocre, nonetheless Kingskin manage to make that connection all by themselves. Their second album is an unremarkable revisit to the worst elements of self indulgent grunge. ‘Stoner Girl’ is clichéd, two dimensional blues rock whilst ‘The One Everyone Hates’ is an abysmal attempt at emotional depth and ‘Mexican Taxi’ is a lifeless, flat song that vocalist Chris Lamb can’t save, no matter how much he screams in his Anselmo-Keenan,-Cobain-esk voice. And the list unfortunately goes on.
Thankfully, it’s not all bad. Whilst the attempts at grinding riffs fit awkwardly around funk guitars and fret wankery there are moments that the band hold their own. ‘Fat Mama Got Soul’ has more kick to it than most with a blistering chorus whilst closing title track ‘Slug’ is a warm, bluesy sludgefest that’s as cosy as it is alluring, proving the band haven’t managed to reach their second album by chance alone.
Unfortunately though, the majority of the time Kingskin sound both tiresome and overstated; it’s all a bit too much pomposity and too little substance. There’s way too little originality or sparkle to be found within these 11 tracks to recognise it as anything more than a below standard effort from this English four piece.
DOWNLOAD: MP3: Kingskin - Fat Mama Got Soul
www.myspace.com/kingskin
Album Review Kingskin Moker MP3's Steve Albini