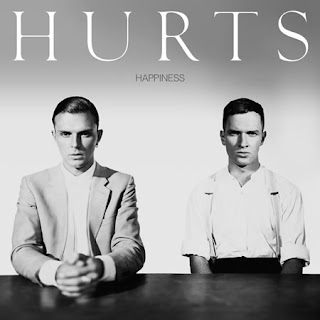 Undoubtedly you have already heard about Hurts. The hype surrounding the 80s throwback duo is phenomenal. Singer Theo Hutchcraft admitted recently the band subscribe to the “give them less and they’ll want more” approach. However judgement day arrived last Monday (06/09) with the release of their debut album ‘Happiness’.
Inevitably, this record is 80s emotional pop from beginning to end, silkily executed without a hint of irony. Songs are atmospheric, epic in delivery and contain huge swooning choruses. Melancholic and poignant territory is covered in imposing love songs such as ‘Stay’, ‘Evelyn’ and ‘Blood, Sweet and Gold’ whilst more familiar pop ground is traversed with ‘Wonderful Life’, former single ‘Better Than Love’ and opener ‘Silver Lining’. Hurts use every trick in the book to pull off what turns out to be an impressively consistent album. Choirs, string sections and harmonised vocals work together to maximise emotional impact, emulating well the more po-faced side of 80s pop.
Soundalikes could be any of the moody popsters of that decade (Black, Pet Shop Boys, Climie Fisher, Johnny Hates Jazz and so on) and this itself comes at a price. You see some will claim that the band’s self-conscious need to imitate makes Happiness a soulless affair but this is both unfair and untrue. It feels, in fact, much more as if the duo replicate out of genuine love for their genre rather than some fevered need to be fashionable.
Whether Happiness is post-modern genius or unoriginal plagiarism isn’t important, it’s the songs, stupid. Despite minor slips in quality (the somewhat dreary ‘Illuminated’ or the throwaway euro-pop ‘Sunday’) overall this album is a fantastic offering that sounds fresh and exciting despite looking to the past for its inspiration. It delivers everything the band promised and more without drowning in expectation. With such a mighty debut it’ll be interesting to see where the band choose to go from here.
Hurts // Buy Album
Album Review Hurts Moker Streams