EP Review : Hold Your Horse Is - Rammin' It Home 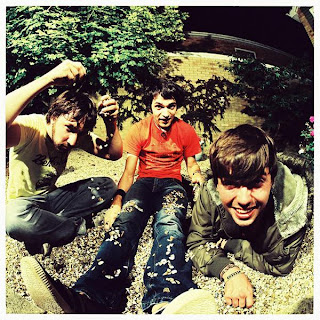 'Hold Your Horse Is' are a trio of energetic math-rockers from southern England who've been hacking away at the underground touring circuit for the last couple years. That’s all about to change. Hold Your Horse Is (HYHI) are no longer content with playing in the dives that Hundred Reasons began their career in – their goal is to be "your new favourite band" (as the PR explains) in the same way Hundred Reasons won the UK's heart all those years back.
This new 6 track EP, 'Rammin' It Home', is their first official release for Big Scary Monsters (following a couple self-released tracks), and HYHI have managed to bag a pretty credible producer for it, in the form of Gordon Mills (his past credentials include alt-legends The Bluetones). Kicking off this half-hour of pacey post-hardcore is free digital single 'You Show Up,' a stabbing riff giving way to some pummeling drums and a barked but tuneful chorus. The second track 'Mackerel Jackson' offers more of the same crashing drums and angular riffs with Robin Pearson's everyman vocals overseeing the whole affair - an appealing vocal performance that seems to stir up memories of everyone from Frank Turner and Cedric Bixler to Blood Red Shoes’ Steven Ansell. 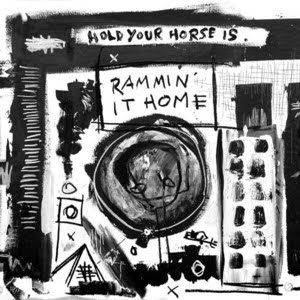 Track 3, 'Non-Stop Physical Training Track,' is perhaps the highlight of this blistering EP with erratic tempo changes and blended post-hardcore guitar-parts. Listening to this song, and the EP as a whole, one can’t help but lovingly think back to mid-career Biffy Clyro - when they were at their most experimental. If this song came sans vocals it'd be hard not to differentiate this from a Biffy demo. But hey, whats wrong with that? Biffy have (for the most part) dropped their heavy riffing and alternating time signatures in favour of Foo Fighters-friendly stadium rock - HYHI come with enough charisma and experimental ambition that they just might be able to fill that void ‘Infinity Land' era Biffy-fans have been crying over.
'Starts And Ends' is a short and sharp burst of math-core, with Yourcodenameis:milo style yelps towards the end, and 'Casual' begins mellow before building up to a mammoth, southern metal-tinged riff that Clutch would be proud to call their own. Closing track 'Welcome To Obscurity' brings to mind fallen heroes Million Dead – ample punk-rock attitude woven with understated melodies. Great track. Great EP.
The only negative point that could be made about ‘Rammin' It Home’ is the EP doesn't really present anything original, something you could perhaps discern from all the band references in this piece. But just because there's nothing groundbreaking about Hold Your Horse Is doesn't prevent them being one of the most satisfying finds of 2010. They make their influences clear - intentionally I'm sure. And for those yearning for the post-hardcore bands of yesteryear, or those begging for Biffy to shove their Mercury Award-nominated ‘Only Revolutions’ in the skip and bring back the crazy (screams and all), then look no further. The new Million Dead anyone?
Hold Your Horse Is // Big Scary Monsters // Download 'You Show Up' MP3 // Buy EP
Big Scary Monsters Clive Rozario EP Reviews Hold Your Horse Is MP3's Streams