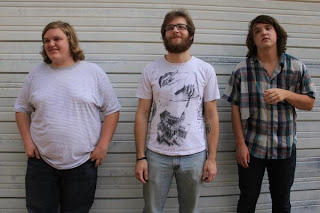 Fresh-faced Mississippi trio Young Buffalo return with a straight-ahead indie-rock song off their forthcoming debut album. Considering their age (probably a collective age of about ten) and their short time together, this US band have accumulated such a huge amount of press support and such a sizable fan base that they make me feel rather old and scared. And they haven't even released an album yet.
Simple and high spirited, 'Three Deep' encompasses all the regular elements that modern indie fans have grown accustomed to – from the angular guitars to the chopping, symbol-heavy drumming. Musically, this is a far cry from the Fleet Foxes-esque 'Catapilah' demo that surfaced sometime prior to this single. However, Young Buffalo retain the huge, melodic harmonies that the 'Foxes have based their career on – all three members contribute to the main harmony, which result in a tight chorus so big it threatens to overpower this little guitar-driven song (in a good way).
Young Buffalo are prepping their Kyle Johnson-produced debut album for a 2011 release through Fat Possum. Considering the raw, jangly indie of 'Three Deep,' as well as the nu-folk and tribal influences of their past demos, it is probable that it will be a varied affair. Music Liberation's appetite has been whetted.