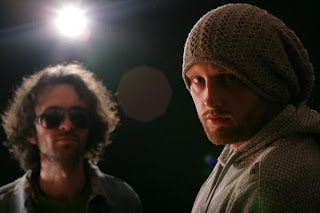 With quite possibly the busiest January for new music ever on Music Liberation in our 4 years of existence, we kick things off on a strong note with Brighton based duo, Surreal. Consisting of vocalist Laurence Allen and multi instrumentalist Tim Rowkins, Surreal could well be the ones to take over from Mike Skinner when he hangs up his boots later this year.
Whilst Surreals music can easily be compared with other singer/beat maker combo's such as Dan Les Sac Vs Scroobios Pip, that lazy comparison hides the true quality.
For me, that quality is Allen, with his ability to combine styles of rap, singing, and spoken word seem almost effortless, with the track 'Distance' being a prime example of this. His lyrics are cutting, switching from sweeping choruses to pin point reflections of modern day life in the UK. The beats get mixed up too, from standard hip hop-ish to piano, to dubstep and dance, sprinkling of guitars, and all back round again. It makes for a real listening pleasure, with the variation on offer making each return to Serreals music seem new, exciting, and fresh.
With remixes lined up for the likes of Jamie Woon, support from indie guru Steve Lamacq, numerous live shows in the pipe line, and a debut album set to drop later this Summer, Surreal could (and probably should) have a very busy and successful year ahead of them.  // Surreal / Twitter / Soundcloud
Surreal - Distance by Music Liberation
Jon Sidwell New Music Surreal