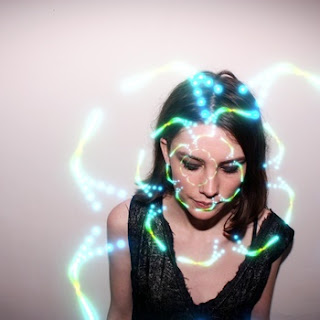 If you somehow welded Best Coast, Sea Oleena, and Bombay Bicycle Club together, you may well just up with London three-piece Wolf Alice. The band, who released their debut self titled EP earlier this year, state that they "write songs about their short lives along the holloway road", which for those unaccustomed is a rather busy, sometimes unforgiving, but wholly entertaining road in north London.

The three-track record kicks off with the single 'Wednesday', a spine tingling opener which is truly delightful in all its synth-folk-pop ness. The song will immediately effect you in some way, I won't say how, but it will. It begins with a simple keyboard rhythm, and a warm bassline is added before the vocals of Ellie Roswell take to center stage, in all her quirky brightness.

Her voice shines throughout this EP, with 'Destroy Me' probably being the pick of the bunch. Her vocals float effortlessly among the almost shoegaze-like folk music, with her gorgeous melodies and delicate voice being hard to not get transfixed by.

'Every Cloud' closes the EP, a track which could soothe even the most tormented mind, with the beat, repeated synths and effects, and of course the vocals perfectly complementing one another in perfect harmony.

This debut self titled EP from Wolf Alice has a really strong 'feel good' quality to it, with plenty of summery vibes emanating throughout amongst a lush futuristic far away sound-scape . It's perfect for dipping in and out of as the dreamy folky pop songs carry you whether you'd like to go, almost catching you by surprise at how well put together, thought out, and open they are. It's a tantalizing glimpse at the potential this group clearly has, and we look forward to watching them develop over the time to come.