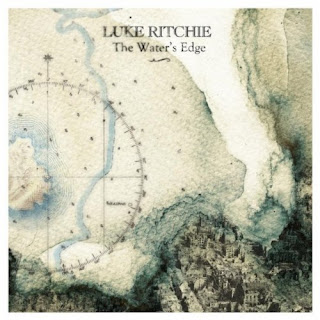 Imagine writing and recording a new song every week for 6 months. Yeah exactly, that's a lot of work right? Well that's exactly what Luke Ritchie did at the start of 2010. Impressive stuff. Fortunately for the more lacklustre of us he's put the best of that material on his debut album 'The Waters Edge', which came out last week through Angel Fall Records.
Produced by Paul Savage, and recorded during two snowy weeks up in Scotland, the twelve track album is a journey through Ritchie's previous hard draft, as well as containing a few new ones. Although it's likely to get billed in the folk category, the record has a much deeper edge and a few more layers than your standard folk by numbers LP. Ricthie himself confesses to preferring the heavier spectrum of the genre, hence the decision to work with Paul Savage, the award winning producer who has worked with the likes of Mogwai.
Kicking off the record in a rather sombre but still powerful manner, 'Lighthouse' straight away demonstrates the range and sincerity of Ritchie's vocals. Next up is 'Shanty', an altogether different track, more up beat and positive, perfect for a right good jig around the camp fire. 'Cover It Up' has a deep warm bass line running through it giving the track some real groove. 'Words' introduces a piano for the first time, and turns out to be a genuinely touching song and one of the strongest on the album, with appreciation of space being a defining characterictic. 'Butterfly' is similar to 'Shanty', more up beat and catchy, giving the album depth and the listener a chance to reflect whats been before. 'Northern Lights' is one of those songs that makes you stop, listen, and think of other moments of your life, with next net two tracks 'Looking Glass' and 'Right There And Then' a reinformanct of that. Final track 'Song To Sundays' brings the mood back up again to give the album a positive ending.
'The Waters Edge' is a powerful, thoughtful, and wholly enthralling debut album by Luke Ritchie, one of which is highly recommended by Music Liberation, and will certainly be enjoying a healthy amount of time on our stereo for the months to come.
Luke Ritchie // Buy 'The Waters Edge' // Angel Fall Records
Album Review Angel Fall Records Jon Sidwell Luke Ritchie Streams