EP: NINETAILS - SLEPT AND DID NOT SLEEP 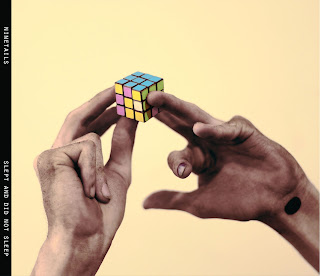 Signed to Superstar Destroyer Records (awesome name), Liverpools' Ninetails follow up their debut EP 'Ghost Ride The Whip' with their new record 'Slept And Did Not Sleep'. Straight off I'll let you know I think it's an incredibly ambitious sounding album that arrives with an ever increasing fanfare from the likes of This Is Fake DIY and Clash Magazine. Having already shared stages with Alt-J, Tall Ships, and Errors, Ninetails have certainly built up a strong reputation already despite their short history together as a band.

The 5-track EP kicks with 'Maybe We', a defiant opening of rumbling bass and distant guitars which is slowly transformed into a full on rhythmical beast, featuring soaring guitars and transfixing drums, alongside otherworldly vocals. It's a strong opening which sounds really complete and together showing a band clearly in tune with their ideas and intentions. 'Body Clock' follows with offbeat drums, intentionally ambiguous vocals, and yet more gorgeous guitars creating those floating hands in the air, slow motion moments. The ending of the song is drawn out, with the band veering off into experimental territory with sound coming and going with various moments of feedback, synths, and drones. For the second track on the record it's a brave decision to stray off the beaten track so early, but it works ever so well. 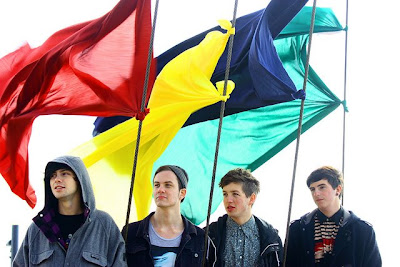 'Fawdon Fever' is next up, a stunningly groove laden track which never ceases to bore, with the intricate and melodic guitars proving hard to not get consumed by. 'Boxed In' is an odd track, being almost devoid of any apparent rhythm or melody, leaving us with distant futuristic bleeps and drones which if nothing else certainly puts you on edge and wondering what on earth is going on. At over 8 minutes in length its not a track which will appeal to all, but if you like to hear different ideas within your musical palette then you may well find something here for you.

Finishing this EP is 'Mama Aniseed', a track which seemingly brings together all the elements which have gone before it. There's the experimental electronic moments, melodic guitars, offbeat drums, as well as the first proper introduction to Ed Black's vocals. For me its the guitars which really suck me in with Ninetails, with the delicate riffs and finger picking complimenting the drums perfectly, leading to those brilliant moments of music which just feel completely right, emphatically suiting whatever mood you're in.

Released on December 10th, Slept And Did Not Sleep is gloriously experimental but still retains a clear melodic and accessible edge. Comparisons could be drawn with the likes of Wu Lyf, Foals, Late Of The Pier, and Everything Everything, but really Ninetails have their own independent sound. You'll pick up different things on each listen of this record making it a real joy for the ears every time. The potential for this band on a full length release is quite tantalising, as is the impact these songs must have on a live audience. Speaking of which the band are playing their first London date at the Bull and Gate on November 29th, alongside the Music Liberation endorsed Crushing Blows. We'll see you there!