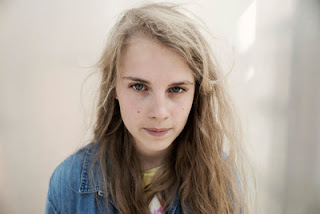 Marika Hackman is a twenty-year old from London, who earlier this year released her debut material in the shape of a double a-side single 'You Come Down' and 'Mountain Spines' through Transgressive offshoot Paradyse Records. She recently supported Benjamin Francis Leftwich, and this week she sets out on her own mini headline tour of the UK. Theres also been a 5-track covers EP which has been floating around for a little while, with acts such as Warpaint, Nirvana, Nico, The Knife, and Dusty Springfield all receiving the 'Hackman treatment'. It's fair to say then that she's been a pretty busy lady of late, and with 2013 just round the corner and mentions of further material appearing soon, she's shows no sign of slowing down. But what of her style?

Well it's folk, but not the happy-go-lucky paint-by-numbers stuff, she has much greater resolve, ideas, and complexity to fit into that bracket. Her voice has great depth, and a dark edge which hints at someone who has done her musical homework and absorbed a wide range of different influences and styles. Returning to the aforementioned EP it is not just the calibre of artists that have been covered, but the approach Marika has taken with it that really shines through, as she brazenly implements her stripped back ideas almost completely transforming the songs into her own material. The cover of 'Lithium' by Nirvana in particular stands out, but each track has its own charm. Overall it's a striking listening experience and a tantalising glimpse at what our ears could look forward to next year with the release of new material. We're excited...