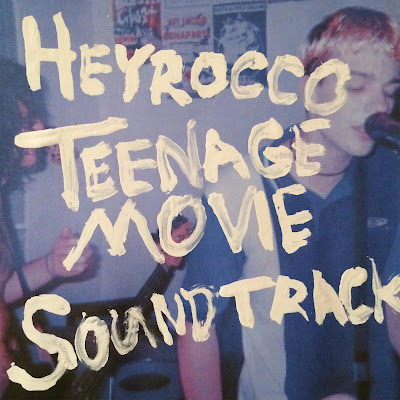 We first covered US 3-piece Heyrocco earlier this year when we named their song 'Elsewhere' as a track of the week in February, and we've turned our attention back to them again for the release of their album - 'Teenage Movie Soundtrack' which is out now.

The band are comprised of Nathan Merli (Guitarist/Vocalist), Christopher Cool (Bassist), and Tanner Cooper (Drums). The ten track album is released through Vital Music Group (Old Flame Records in the states), and it sees the band put together a highly energetic, well-constructed, and ultimately well received debut record. There are pop hooks aplenty throughout the album but there's also some rather meaty guitar parts which allow for an appreciation of both elements.

The band were on tour with The Xcerts back in April of this year, and you can see the links between those bands certainly, but we've also seen Heyrocco linked with the likes of Blur, Pavement, Nirvana, The Cure, and Mudhoney, and you can indeed hear all of those influences on Teenage Movie Soundtrack. But that's in no way a bad thing, and you get the sense that a generation of new ears might hear this album and go absolutely nuts for it, as well as reeling us nostalgic old guys in!