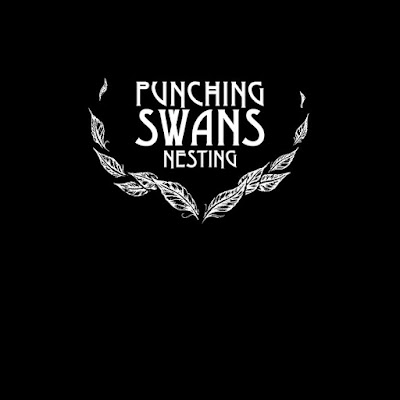 Punching Swans are a London 3-piece with two albums ('Punching Swans' / 'Mollusc') and a split EP ('Mr Insipid') under their belt, all through the Medway record label Skingasm Records (Medway refers to the Kent area if like us you didn't know that!). This year the band are releasing their third record 'Nesting' digitally and on a hand numbered limited edition CD/Book run of just 30.

Nesting is an impressive collection of 10 tracks which fit neatly within that often forgotten noses turned up at strand of rock - math (or noise or art) - which basically means I'm meant to use phrases like 'angular guitars' and 'off kilter song structures', you know the drill here. So let's try not do that, instead lets focus on an album that at times is sonically challenging yet is ultimately damn rewarding.

'Ovulations' and 'Beak Throat' are perhaps the more easily accessible of the opening tracks, cleverly placed midway through the album to enhance the others. 'Headless Chickens' carries on the bird theme of the album, 'Kiwis' sounds so much like The Fall its uncanny, and similarly lead single 'Pecked To Death' is traipsing into Pulled Apart By Horses territory. Nesting finishes with Flight which must be the closest Punching Swans get to a pop song, with the dual vocals and slightly less caustic guitars helping to finish the album on a high.

Nesting is out now, whilst you can catch Punching Swans on a UK tour in January/February.