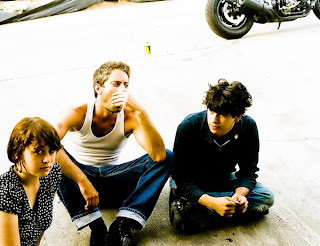 Noisy, shoegaze garage rock is on offer here from Minnesota guitar-janglers Gospel Gossip. The excellently titled single ‘Sippy Cup’ bursts in with fuzzy guitars, wailing feedback and propulsive drums. The whole tune has a warm drunken slur to it and an emotional weight to boot. Mumbling vocalist Sarah Nienaber delivers a fantastic performance where you can identify with her struggles and hear her pain even if you can’t understand what she’s saying. The point is you don’t need to. This powerful song would be equally at home to the beer soaked indie club as it would to the party of one in a bedroom; it ingeniously upbeat and noisy but oddly comforting.
It’s no surprise that Gospel Gossip sound like they do; after all fellow Minnesotans Husker Du and The Replacements created the mould for this trademark shambolic garage rock that Sippy Cup sounds so much like. Too much like in fact. The intro sounds exactly like ‘Bastards of Young’ and the comparisons don’t stop there. This could be any number of Replacements’ songs and Nienaber’s vocals are near identical to Paul Westerberg’s inebriated howl – even if she is female.
This is a brilliant, exciting and chaotic song that effortlessly connects to its listeners, it’s just a shame the band haven’t put their own twist on Minnesota rock. They’ve obviously subscribed to the “if it ain’t broke don’t’ fix it” ideology which, on listening to Sippy Cup for the twentieth time, is more than fine by me.
www.myspace.com/gospelgossip
MP3: Gospel Gossip - Sippy Cup
Gospel Gossip Moker MP3's Single Reviews