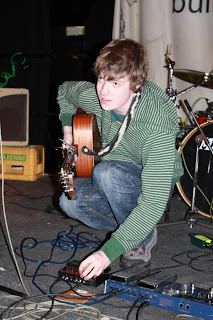 Hailing from London, 21-year old Jack Morgan is an unsigned singer/songwriter. Having written and recorded music at his home for some time, six of his tunes have been selected to create this EP, ‘Sleep in Heavenly Peace.’
Opening track ‘Make No Mistake’ is a somber instrumental track, with Morgan strumming slowly over a sonic, effect-laden background. The rest of the EP is a predominantly low-key affair – no backing band, just Jack’s whispery voice and gentle, solo guitar-work. ‘Event’ is the most urgent of the songs on display, the aggression bubbling beneath the stripped back rock song recalling the late Elliott Smith. A fine song, but the tone is not fitting with the next four songs, all of which are wistful acoustic numbers. The tender plucking of ‘No Strain’ and ‘Ukul’ coupled with Morgan’s Joshua Radin-style vocals are charming in their simplicity, while ‘Furtherance,’ with its eerie effects, could be a Thom Yorke ballad. Closing track ‘White Wires’ is perhaps the most memorable song on the EP, the layered vocals of the chorus and light finger picking closely resembling Kings Of Convenience.
‘Heavenly Peace’ is a lovely little EP, but Jack Morgan’s collection of songs, despite showing some versatility, are not particularly original. To his merit, since the EP was mainly recorded at home, the standard of his musicianship and, in particular, his lyrics are commendable. Furthermore, I don’t think the fact that it’s so easy to make these comparisons with other artists (such as the aforementioned Elliott Smith and Kings Of Convenience) is necessarily a bad thing. Considering his age, and that this is his first real release, Morgan is confident in his potential, and is not trying to hide his influences – plus, to be mentioned in the same breath as Elliott Smith is certainly no mean feat.
Jack Morgan Myspace /// Stream EP /// Buy EP
MP3: Jack Morgan - Event
Clive Rozario EP Reviews Jack Morgan MP3's