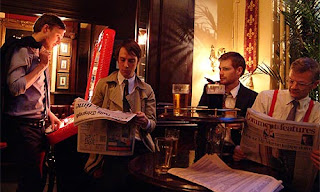 Any band who start a song with an air raid siren are making a pretty bold statement and taking a rather large risk. If the song that follows doesn't stand up to such a stark introduction then you may well lose all credibility and never recover. Thankfully for Londoners Django Django their latest single "WOR"doesn't fall into this trap.
Released this week through Bonjour Branch, WOR comes at you full throttle with rattling guitars which jerk along almost as if your at a hoe down with amplifiers. Django Django are a difficult band to put a tag on or compare to others, which as well as being refreshing also helps draw you into their spell. This track is quirky, stopping and starting all over the place, but somehow out of nowhere it will catch you off guard and win you over. Vocals are put somewhat on the back burner, where as percussion is rife throughout. It's interesting and certainly shows a band with plenty of ideas, as does b side "Skies Over Cairo" where we are introduced to a series of hypnotic keyboards and effects. Django Django are certainly a band worth looking out for this year.
Django Django /// Buy WOR single /// MP3: Django Django - WOR
Django Django MP3's Single Reviews