Posted by Megan Howard on May 12, 2010
[Today we see Music Liberation welcoming a special guest writer to cover one of our favourite releases of the year so far, Foals 'Total Life Forever'. Megan Howard who runs the 'love, ire, the song' blog, is someone who has a talent for writing well beyond her years, and will surely move onto bigger and better things in years to come. For the time being she's giving us her thoughts on a rather stunning second album from Foals.] ED 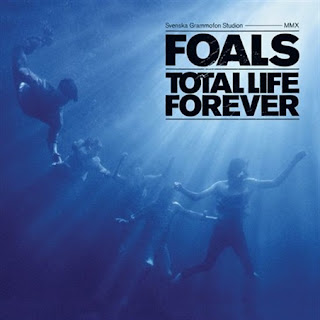 When you say 'Oxford' to someone, they instantaneously might think three things; Radiohead, universities and snobs. Soon, Foals will be one of the first things they think of. They're emerging as one of the most influential bands of the last decade. Debut album 'Antidotes' sealed Foals position as one of dance-punk-math-rock heroes, but it was always going to be a hard task with the follow up album. What is it they call it? Oh yes, 'second album syndrome'. Luckily, Foals must have taken the jab for that particular illness... 'Total Life Forever' is a cracker.
Opening song 'Blue Blood' along with 'Alabaster' and '2 Trees' - gives you a whole new view on vocalist Yannis Phillapakis. His voice is vulnerable, heartbreaking, emotional and shaky - things we never really had the chance to hear before in any of the songs on 'Antidotes', suggesting that Foals have both grown up lyrically and musically.
When it comes to songs like 'Miami', 'Black Gold', 'This Orient' and 'Total Life Forever', however, you can see the old Foals peeking through, with the usual enormous catchy choruses and enough funk to make you stand up wherever you are and dance like there's no tomorrow...
'Spanish Sahara' is a completely different matter. It utterly mauls your mind, body and soul. The sluggish, almost silent start with Yannis' voice in it's purest form, then with a sprinkle of Jack Bevans tinkley drumming, added with a toss of gentle guitar; all of this leads up to a chemical reaction of a chorus... it erupts into your ears. And with appropriate lyrics like: "I'm the ghost in the back of your head", you can do nothing but agree. 'Spanish Sahara' is the stand out song of the album; prepare to be haunted.
Thank God for song 'Fugue'. It's the 49 second, well needed breather, that comes half way through the album. 'What Remains' is like old Foals tune 'Tron' hit round the face by puberty; 'After Glow' is heartbreakingly vulnerable and contains the lyric: "you were better than whatever came before". 'Total Life Forever' on the whole is clearly better than whatever came before.
And so, the pure emotional intensity of this album makes it irresistible. Admittedly, you might not completely understand it upon first listening, but give it a chance and it just might be your album of 2010.
Foals // Buy 'Total Life Forever'