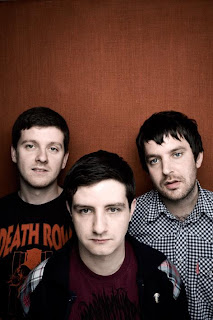 Hot on the heels of ‘With Days Like This As Cheap As Chewing Gum, Why Would Anyone Want To Work?’ (…breath) Hot Club De Paris return with their second EP of 2010, entitled (…sigh) ‘The Rise And Inevitable Fall Of The High School Suicide Cluster Band’ (…breath).
This Liverpudlian three-piece have been signed to brilliant indie-label Moshi Moshi since 2005, and this marks their fourth release – following two full length LPs and the other EP released this year. Hot Club De Paris’ have always managed to seamlessly fuse pop harmonies with odd, art-rock time signatures, whilst constantly managing to maintain a DIY punk simplicity.
This new release is, as much of their back catalogue, equal parts accessible indie-pop and experimental math-rock. Opener ‘I'm Not In Love And Neither Are You’ kicks the EP off with a little, twiddly riff (think Vampire Weekend) before it all explodes with a short Led-Zep inspired midsection amid crashing drums and twin solos. ‘Free The Pterodactyl 3’ may be a surprising choice for lead single with its leisurely pacing, but it is an absolute gem. The group-vocals of the three-way harmonies are sublime and, as always, Paul Rafferty’s lyrics are candid and inspired. The other highlight is the energetic title track, which combines Third Eye Bind’s American post-grunge with British melodic-indie.
‘Biggie Smalls And The Ghetto Slams’ is a fine tune, but by no means does it hold up with the trio’s best. The EP closes with two tracks that both begin with slow-pacing. The bluesy ‘The White Town Express (Get High, Stay Low)’ eventually builds to a barking finale in the vein of Kele from Bloc Party, while the closing track ‘Three Albums In And Still No Ballad’ pretty much is a ballad (despite the title), and an elegant one at that.
‘The Rise and Inevitable Fall…’ lacks the urgency of ‘With Days Like This,’ but what it loses in energy it more than makes up for with songwriting ability – the down-tempo sections of this EP showcase a previously unheard maturity in Hot Club De Paris’ craftsmanship.
Hot Club De Paris // Moshi Moshi // Buy E.P
Clive Rozario EP Reviews Hot Club De Paris Videos