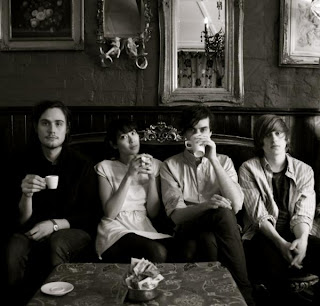 Here’s a story. A long time ago in a galaxy far away, I met up with Little Death front man KC Underwood in a pub in Camden. He’d advertised for a guitarist for his new band and I’d responded. The upshot was he was nice and I was intimidated - the music he was touting about was seriously good.
Chalking the meeting up as just one of many fleeting musical encounters, I’ve nonetheless kept one eye out as Little Death have grown in profile; albeit painfully slowly. Out on a metaphorical limb, the band seem to consciously ignore the musical zeitgeist, instead playing their own brand of punky, grunge epicness dowsed in angst. New single ‘Just Say Maybe’ is no exception to this rule. Sounding more early 90s than 2010, it’s as if Nirvana and Pearl Jam got together to write a song with Conor Oberst. A swaggering bass line is met by swirling, gnarly guitars whilst Underwood wails his woes over the top, sweetened by wispy female vocals in poppy choruses. It’s full of energy, attitude and effortless cool. In fact, it manages to seem both controlled and wonderfully chaotic as if everything’s on a knife edge, the music sounding as emotionally fragile as the lyrics.
Focused, determined and cleverly complex, ‘Just Say Maybe’ is surely argument enough to say that some well deserved success is heading Little Death’s way.
Little Death // Pre order "Just Say Maybe" // MP3: Little Death - Violent Sea (Single B-side)
Little Death Moker MP3's Single Reviews