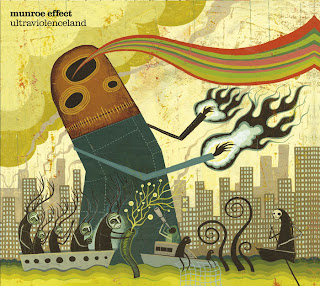 Delivering a much needed and long overdue shot in the arm of a stagnant post-hardcore scene, Portsmouth’s Munroe Effect this week finally unveil their debut album ‘Ultraviolenceland’. Released through Dead Plant Records, and mastered by Alan Douche (Dillinger Escape Plan, Brand New) this record reveals a band who sound equally at home flailing chaotic guitars around, as they are laying down soaring melodies.
Kicking off with ‘The Escape (Part Two)’ the band grab your ears straight away with jagged guitars and pounding drums, interspersed with soothing vocals along the lines of Eighteen Visions (remember them?!) before things get messy (in a good way) as a mini breakdown sets the signal of intent for an album that never lets up. ‘...Call In The Futurists’ starts off all chaotic, before sporadically breaking for sweeping vocals and soaring guitars, and then doing it all over again.

As the record develops you realise the band have taken a grunge like approach to their love of post-hardcore, with the classic stop/start, slow/fast, quiet/loud formula applied to perfection. This is none more so apparent than with ‘Operation: Magic Kingdom’, where Leeds upstarts Pulled Apart By Horses are given a serious run for their money. ‘Eating People’ will please you head bangers, ‘/ I Might Be Allergic’ the dancers among you, and ‘Ghost In The Machine’ is for you lovers, kind of. The final two tracks ‘ISM’ and ‘Doctrine’ hint at a greater depth to this band which will no doubt be explored on future records.
With significant support shows for the likes of The Subways and Gay For Johnny Depp, alongside some airplay from Radio 1’s Daniel P Carter, it looks very likely that this hardworking young band will turn many heads and crush lots of ears this forthcoming Summer. See you at the front.