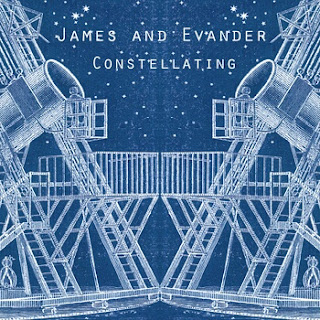 Recently released through Velvet Blue Music is ‘Constellating +2’, the latest EP from James & Evander, an electronic duo based out in Oakland, America. Having extensively toured the west coast this summer, James & Evander (aka Adam Myatt & Glenn Jackson) are looking to get that sort of break across this side of the ocean in the forthcoming months. We decided to check their new record out to see what chances they have, as well as try to work out what that ‘+2’ is all about.
The 5-track album begins with ‘Constellating’, a track which sets the tone and nature of this electro pop group perfectly. From the outset there are plenty of mellow spacey synths and keys, over which soft vocals are sung, before the track really gets into gear with the introduction of some groove laden drums. Sounding like a cross between Delphic, Friendly Fires and Fenech Soler, James & Evander demonstrate they have a real ear for a ‘catchy hook’, as they expertly use repetition of vocals, keys, beats, guitars, anything they put their mind to really, to grab the listener into their spell. ‘Slap Bracelets’ carries on in a similar vein, with a slow building start to the track before things are ramped up in emphatic style and you can’t help but get swayed along again. Changing tack slightly is ‘Really Real’, where a drone like bass line is covered with a glorious array of bleeps, synths, and other electronic effects. The vocals are gone this time, which actually allows the music to really stand out so you can fully appreciate the futuristic spacey sound they create. 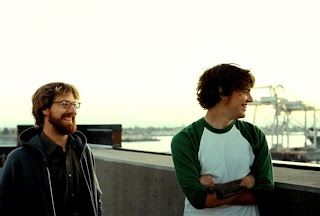 Then comes a possible explanation for the ‘+2’, as the final two tracks of the EP are remixes. There is one for ‘Constellating’ with the Anders remix, and then ‘Slap Bracelets’ is reworked by Shortcircles. Whilst both these remix tracks fall short when compared to the originals, they do demonstrate how the music James & Evander make opens itself up for other interpretations. Of course the ‘+2’ could refer to the two guys in the group, or indeed something else entirely unrelated to the number 2, I guess we’ll need to speak to them direct to find out!
Without doubt this EP shows great promise for James & Evander to be successful over in the UK, much in the same way as someone such as Caribou has done with his own brand of mellow electronic pop music. It will certainly be interesting to see how the duo develop and discover what they can produce on a full length album, which is incidentally pencilled in to be released next year.
The ‘Constellating +2’ EP is available now through Velvet Blue Music. // James & Evander / Listen on Bandcamp
James & Evander - Constellating by INDIGENOUSPromotions
EP Reviews James and Evander Jon Sidwell Streams Velvet Blue Music