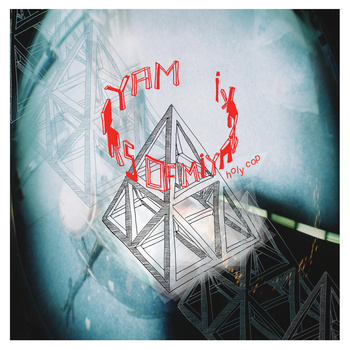 Brat punk. The exuberance of youth pouring out of every jutting note and shouty verse. Adolescence is both a celebrated freedom and an angst-ridden cross to bear for those in this genre. They’re young, they’re twee, they’re happy. They’re sad, they’re hurt, they’re self-harmy. Such personal turmoil is expressed in an oddly uniform way across the genre considering it comprises of people seemingly angry about conformity and the need for self expression.

Mostly, it’s dual vocals that yap and protest whilst angular guitars jab out math riffs that burst into poppy digressions now and again. Here’s a twisted guitar riff that Battles would be proud of. Here’s a sing along chorus that Johnny Foreigner would love.

Here’s an album by Mayors of Miyazaki called Holy Cop.

You can’t help but feel this brat punk, angular, indie rock genre has sailed, disappeared over the horizon, hit an iceberg and is coming back to us in dribs and drabs as flotsam and jetsam. Yet it’s not Mayors of Miyazaki’s fault they’re struggling to stay afloat on an ex-boat. Or genre. Or something. “I didn’t ask to be born!” they might exclaim, before eating their dinner in their bedroom, rather than at the dining table with the rest of the family.

You see, this music has been done and then done some more. The yearning, burning, churning of urgent, angular notes and jerky vocals, the endless switching between the purposely obtuse and the accessibly pop. The duel vocal shrill, the 7/8 time signature, The Automatic, Dananananaykroyd; whatever. Dynastically, this record is a carbon copy of the genre’s forefathers. A predictable romp at best. 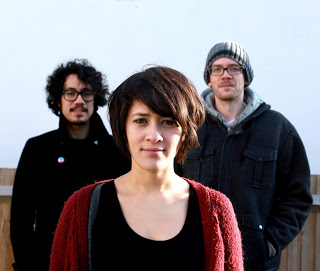 Holy Cop conjures up the summer nights of youth, the burn of teenage love and the unrepentant loyalty of your equally youthful friends. It’s all painted here in broad strokes. Broad indeed, as chopping up this album into individual tracks is a baffling challenge. It’s a giant, continuous smear of meandering notes, staccato rhythms and shouty choruses. Saying that, the celebratory jangle of ‘Tongues’ is more poppy and enjoyable than most, whilst the Sleigh Bells style ‘Human Resources’ is a mouth-wateringly jagged and turbulent ride. The wonderful head nodding and groovy riff on ‘Parts per Million’ is stand out, whilst ‘Dry Palm’ has reverberations of 80s post punk pop and the monstrous ‘Muy Sexo’ is a stomping, awesomely swollen riff that could be in any number of gangster movies.

This album seems, at first glance, uninspiring if only for its formulaic predictability. It appears dated and oddly naive. There are moments that, probably in their bid to be different, sound like everything from the last decade. The closing track is guilty as charged, for example. But in this haystack of fiddly guitarisms and half riffs, of barking, spluttered vocal lines and a million drum fills, is a charm, an identity, a odd idiosyncratic quirk that draws you in. The naivety becomes welcoming, a permission to let go of pretension, an instruction to just fucking enjoy yourself. Ok, so Holy Cop isn’t all good but it isn’t all bad either. Its weaknesses are perversely its strengths. It’s hedonistic goofiness turned up to 11. And that alone, is worth checking out.

Holy Cop is out now. // Mayors Of Miyazaki