Music Liberation is pleased to announce that this year we are supporting the 2000trees Festival in Cheltenham which is taking place between July 10-12th. Not only will we be previewing and reporting live from the event, but we will also be giving away a free weekend ticket to one of our loyal Music Liberations fans!

Details of the competition will be announced next week, so for now sit back and find out a little bit more about 2000trees, which last year won the Grass Roots Festival Award at the UK Festival Awards 2013 no less! 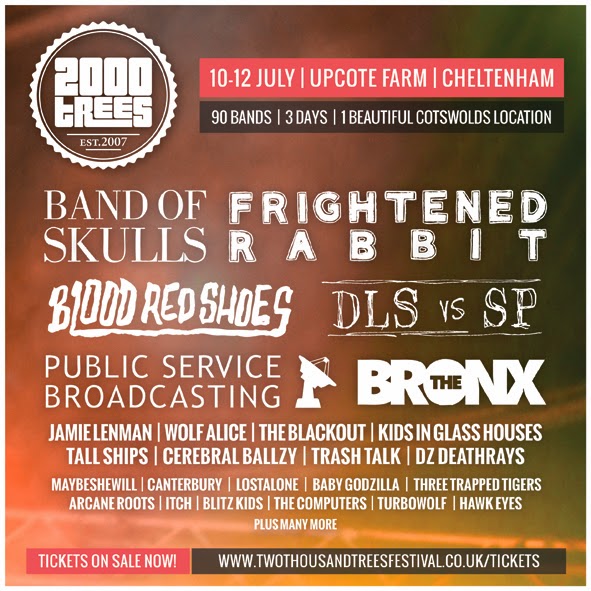 First and foremost lets get to the headliners, Band Of Skulls, and revealed this afternoon the glorious Frightened Rabbit! Alongside them you've got the likes of Blood Red Shoes, Dan Le Sac Vs Scroobius Pip, The Bronx, and Trash Talk.

That's not to mention a large number of acts that have graced the pages of this blog in times gone by, including Public Service Broadcasting, Wolf Alice, Tall Ships, DZ Deathrays, Turbowolf, Lonely The Brave, and Johnny Foreigner. Pretty easy to see why we would support a festival which clearly shares the same tastes in music!

Created by a group of friends in 2007, 2000trees was borne out of frustration with the ever increasing corporate sponsorship and ‘musical merry-go-round’ nature of the larger mainstream British festivals.

Disillusioned by extortionate ticket prices and over-priced food and drink, this band of festival veterans vowed to take matters into their own hands and in true punk rock style set about developing the perfect antidote.

5,000 music fans will get the chance to discover the very best new and underground bands on six stages, plus comedy, Silent Disco DJs, quality food and drink and much more, in a picturesque Cotswolds setting.

2000trees organiser James Scarlett said: “We book exciting and interesting bands who bring something new to the music industry and we are delighted with this year’s line-up, it is our strongest yet with a depth and breadth of talent for everyone to enjoy.”

Get more information and purchase tickets here - www.twothousandtreesfestival.co.uk - and remember to check back next week to find out how you can win a free ticket!