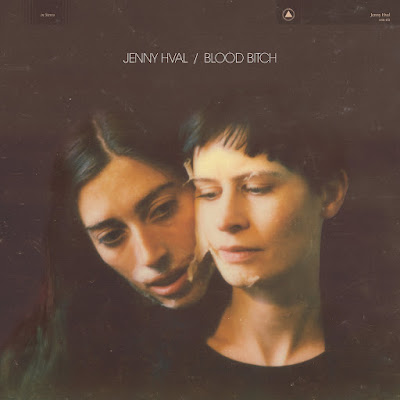 Blood Bitch is the third album to come from Norwegian singer songwriter Jenny Hval (plus the two she did under the alias Rockettothesky). The record has been released through Scared Bones Records and sees Hval work once again with Lasse Marhaug on co production duties.

The lyrical content and themes of Blood Bitch revolve around three areas; the continual relationship of pop and art, vampire films, and an examination of menstrual blood artwork. For those familiar with Hval's work this avant garde take on culture is common ground, but for those of us uninitiated it can take you a little out of kilter at first but upon reflection it does provide the album with real depth.

The sound is also varied, very much in line with the content. There's 10 tracks and a length of around 36 minutes, moving from the electronic sounds of  'Female Vampire', 'Conceptual Romance', and 'The Great Undressing', to the softer/haunting 'In The Red' and 'Lorna'. Hval's voice also moves around, at times whispering, at times spoken, but all of the time considered and on point.

Blood Bitch is a challenging album, sonically and lyrically, but it's important such albums are made and such artistic integrity from Jenny Hval is supported, nurtured, and allowed to flourish.