Posted by Jon Sidwell on May 26, 2009
Compared to other music genres, I've always felt that the heavier end of the rock spectrum endures a pretty raw deal when it comes to the blogging community. A visit to the Hype Machine generally shows top lists dominated by electronic and indie tunes, with little attention given to the alternative posse. But why is this? Is this due to the quality not being there and so therefore PR companies and labels are not willing to promote the artists? Are people done with Rock bands dominating the internet ala Myspace? Is it merely due to the other genres being more popular and hence there being more blogs covering those? Well to be honest i think it's a mixture of all of those things and more, and certainly worth a debate at some point. However once in a while a band will break through and stand out to me from the mass crowd. Today that band is The Upset Victory. 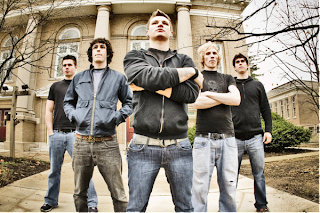 Cincinnati punk rockers The Upset Victory (Frank Hammonds (vocals/guitar), Jeremiah Kramer (guitar/vocals), Stephen Campbell (guitar/vocals), Spencer VanDerzee (bass/vocals), have been together since 2006. They have recently put out their second E.P "Between The Walls And The Worlds That Sleep", and have also began work on the first full length offering. Their sound oozes energy and is tight, with frentic drums littering most tracks, melodic yet not over the top vocals, and a nice balance of guitars blending from crushing riffs to small but perfectly formed solos. Stateside comparisons can be made with Thursday, Thrice and early Aiden, whereas us Brits are reminded of a young Funeral For A Friend.
Head to the bands myspace for more information and check out the tracks below for a taster.
MP3: The Upset Victory - Signals (LINK 2)
MP3: The Upset Victory - The Will (LINK 2)
Featured Artists MP3's Sid The Upset Victory