Posted by Moker on May 18, 2009
Time to introduce another new writer to the Music Liberation team. Everyone please welcome, Moker!
Hello. Sid’s let me write some reviews and generally lower the tone of Music Liberation as I inflict my misguided opinions about music onto you all. My qualifications for such a task are few and far between, other than the fact I listen to and play music avidly.
Without wanting to use the word eclectic, my musical tastes began with metal, moved onto grunge and alternative rock, art-rock, post-rock (in fact, anything that prefixes “rock” it seems) and I've also got a taste for house and ambience dance. Furthermore, I somehow have a secret shame of major chord, poppy tunes that I pretend not to like. I pretty much believe all bands have some merit to them, and music is to be enjoyed without pretence or fashion getting in the way. 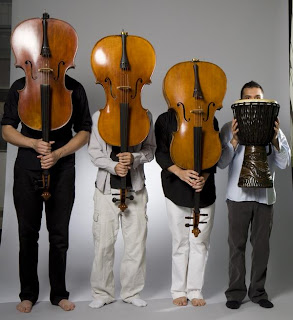 Someone told me recently that “post rock is so over”. Not that I agreed in the first place but he had a point. How many more bands can we all stand that sound a sub-standard Explosions in the Sky or God is an Astronaut? So step up New York based instrumental band Break of Reality. This four piece (three cellos and a drummer – oh yeah) have managed to sound fresh and original in a genre that’s tired and overdone. They are simply brilliant.
When I first played ‘Spectrum of the Sky’, the first single off their second album of the same name, I was immediately pulled in. In a genre where the music is positively encouraged to be audio wallpaper, wallpaper this ‘aint.
The track starts with groaning notes played over hectically plucked strings, before crashing into a booming drumbeat over a minute later. Am I making it sound a bit dramatic? Well it is.
What’s more, the listener is led through the many crescendos of the track without a distortion pedal in sight; Breaks of Reality create contrasts in their music with an ease that would make other bands blush. More importantly, this track sounds personal, heartfelt, as if it’s being played to you and you alone; there’s not a whiff of over production or mass marketing here. The nearest comparisons I can draw are Mogwai or Red Snapper but this doesn’t really do Break of Reality’s uniqueness much justice. 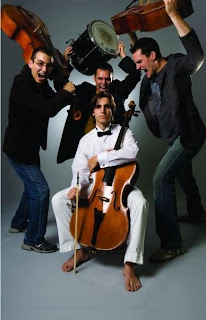 So what’s the catch? Well there isn’t one really. They even manage to overlay falling rain onto the track without it sounding remotely clichéd. The only question would be how much can this format survive before it get’s repetitive? Listening to the other tunes available on their MySpace  I felt a bit cello’d out, but as a stand alone single, Spectrum in the Sky is superb. Caught between classical, post-rock and I don’t know what, this band deserve your attention.
MP3: Break Of Reality - Spectrum in the Sky (Link 2)
Break Of Reality Moker MP3's Single Reviews