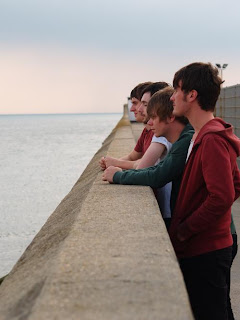 This first official release from Jumping Ships has taken a while to surface, having taken up roughly a year of the band’s time to record. Initially, it was announced that these recording sessions would culminate in their debut album, but what we actually have here is a six-song EP. After all the work put in at Brighton Electric Studios, it would be easy to jump to the conclusion that these tracks were the only ones considered decent enough for release. However Jumping Ships have explained that these six songs best sum up the direction they wish to pursue at this moment in their career (with the others to follow at a later date online).
.

So what is this present direction that this Brighton quartet wish to pursue? Well, to sum up the varying influences they sound-check on their debut EP ‘Orientation’ is not perfectly straightforward, but perhaps their overall sound is best summed up as indie-rock with a pop sensibility and a melodic post-hardcore undercurrent (although, that’s a bit of a longwinded summary isn’t it!?). Opener ‘The Matterhorn’ shows that they obviously picked up a thing or two from their support slot with Biffy Clyro; jagged riffing and a climax with an accelerating pace, which features a couple of Simon Neil-esque yelps. The rest of the EP also features this angular guitar-work normally associated with post-hardcore, but each song contains other aspects from different subgenres of alternative rock. For example, there are glimpses of the textured, sonic experimentation of space-rock [ED: Space Rock?! Thats a new one on me!] on ‘The Bad Outweighed The Good’ (a track that brings to mind Cave In at their most commercial) and the ferocity of punk on the urgent two and half minutes of ‘Brick House.’
. 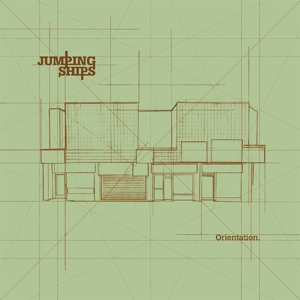 ‘See You Next Tuesday’ posses some lovely layered guitars and a soaring melody, but it’s the closer ‘Temper Temperamental’ and third track ‘The Whole Truth’ where we hear Jumping Ships at their most compelling. The acoustic guitar that kicks off the closer jumps into some heavier guitars before the gang harmonies of the memorable chorus fully engage the listener – great ending to the EP. ‘The Whole Truth,’ however, is the tune that will stay with you, and that’s just because of how catchy and accessible the jumpy chorus and bouncing drumbeat are. It’s Jumping Ships at their poppiest – recalling the guitar-heavy indie of The Automatic – and it’s the song that’ll divide pre-‘Orientation’ fans (but also bring them a host of new ones).
.
A special mention must also be made of the production quality, which is nice and crisp, especially considering it was recorded on a shoestring budget. The EP is out now on Glassbottom Records, and although it’s nothing particularly groundbreaking, it’s tuneful and well worth checking out.
.