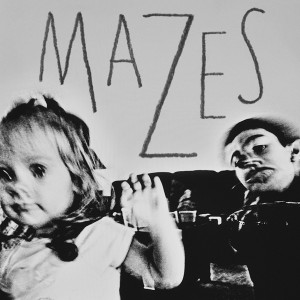 Categorically one of Music Liberation's albums of the year so far comes in the shape of 'A Thousand Heys', the debut long player from London's Mazes.

Released last week through the equally impressive FatCat Records, the album is a quick fire trip through rock and roll history, checking in with The Kinks, The Beatles, The Buzzcocks, as well as modern day counterparts such as The Cribs, No Age, and Tokyo Police Club.

With the thirteen tracks clocking in at just over thirty minutes, there is little time to draw breath, but then why would you want to when the intensity and sheer fun of this record pulls you one way and then the other over and over again.
Album opener 'Go Betweens' sets the tone of the record, with simple, pacey drums interspersed with scuzzy energetic guitars and playful yet punchy vocals from frontman Jack Cooper. 'Surf & Turf / Maths Tag' demonstrates the bands ear for tempo changes, where as 'Most Days' is them at their most ferocious. 'Cenetaph' reveals a deeper more emotionally tinged sound for the band, and album finale 'Til I'm Dead' must be emphatically fun when performed live.
A Thousand Heys is a fun, chaotic, frenzied, emotional roller coaster of a debut record that will have you hitting the repeat button throughout the forthcoming Summer.

Check out the interview we did with Mazes frontman Jack Cooper last month here.