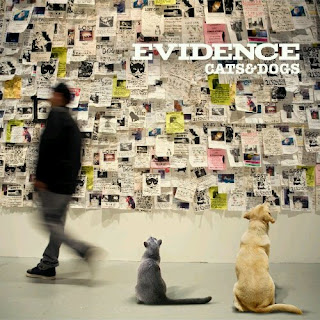 As is often the case with artists that earn critical acclaim, ‘backpackers’ favourite, LA’s Dilated Peoples never seemed to be able to turn that praise into the commercial success they deserve. With four albums under their belts, DJ Babu, Rakaa Iriscience and Evidence decided to take a break from recording as a group and focus on their solo careers. Of the group’s two lyricists, it is Evidence that has successfully managed to maintain something of a cult following in an increasingly crowded hip hop market.
Following the meteorology theme Ev started on his well-received debut LP 'The Weatherman' in 2007, Cats & Dogs is his first release for Minneapolis based Rhymesayers Entertainment.
While Evidence may not be the most technically gifted emcee, his voice is engaging, his flow polished and on every track he oozes a laidback confidence that fans of West Coast Hip Hop will be familiar with.
What does need to highlighted, though, is Ev’s ear for beats. Simply put, it is impeccable. While he is himself an accomplished producer, only two tracks on the album ('I Don’t Need Love' and 'Late For The Sky') boast his name in the liner notes, even then only with co-production credits. Instead he hands production duties to long-time friend and collaborator The Alchemist, duo Sid Roams, Rahki, Charli Brown and Twiz the Beat King, the lesser-known names more than holding their own in esteemed company as the album shifts from soulful and introspective to big and brash seamlessly. 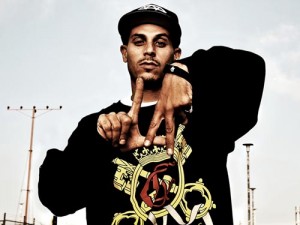 The album also features the legendary DJ Premier who laces the understated single 'You' and the darker, horn-based album closer 'Epilogue' with his trademark chopped samples and scratched hooks, to the delight of this fan-boy, at least.
The featured guests are also strong. Aloe Blacc drops in to add some soul to the sinister opener 'The Liner Notes' and 'The Red Carpet' sees Evidence hold his own with two of Rap’s most celebrated lyricists; Raekwon (of Wu-Tang Clan) and West Coast veteran, Ras Kass over a smooth vocal-sample based Alchemist backdrop. Label mates Slug and Aesop Rock turn up on Emo-Rap fans’ wet-dream 'Late To The Sky' and underground Rap’s current golden boy (and deservedly so) Roc Marciano blesses the moody strings and guitar lick of 'Fame' alongside Mobb Deep’s Prodigy.
With no trace of a radio-friendly single or a floor-filling club banger, Cats & Dogs may not win Evidence new fans, but after two decades in the business, it is clear that isn’t important to him. He knows his strengths and he plays to them.

If you like whiplash-inducing beats and solid rhymes, you won’t go wrong with this LP.

You can buy the album now from Rhymesayers Entertainment // Evidence

[*Many thanks to Tom Nash for his first article for Music Liberation, find out more about Tom on his The Write Tom Nash site.*]
NEW Single 'Red Carpet' by EVIDENCE feat. Raekwon the Chef & Ras Kass by Suniula.D