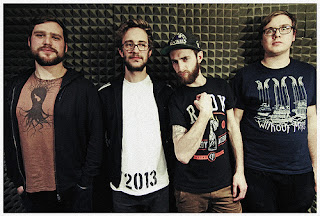 Bloody Mammals are a post hardcore 4 piece from London, who in May will release their debut mini-album 'Eventually Your House Will Burn Down' through 49s Vs Dolphins and Flatpack Recordings.

Taken from said album is 'Madam', a frenetic two and a half minutes of controlled mayhem - you could think Comeback Kid, La Dispute and Touche Amore, but with a quintessentially British vibe emanating throughout.

It's refreshing to hear such aptitude for their craft from a band this side of the pond - it's fair to say we are expecting big things from the mini record when that drops later this year!

Pre-order 'Eventually Your Horse Will Burn' through Bandcamp // Bloody Mammals