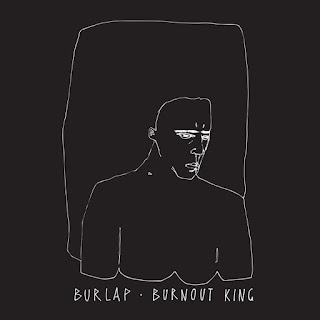 Burlap are a noisey, heavy, punk rock 4-piece from Sydney, Australia, who have just released their debut album 'Burnout King'. The record is available as a split release through Trait Records and Black Wire Records, as a digital download and on a limited edition 12" vinyl run.

The 8-track record comes in at a little over 30 minutes and to be honest that's about all you need with this lot. The half an hour with Burlap will leave your senses tarnished for good, or bad, as they put together a mix of detestable vocals, churning guitars, pummelling drums, and unrelenting rhythms. On a side note the album was recorded and mixed by Ivan Lisyak of The Paper Scissors fame.

There is a forthright intensity throughout the album which makes you feel a little uneasy, but at same time you get the impression that Burlap are toying with us a little and aren't taking things too seriously. Our favourite track on the album - 'Bubbles' shows this with the doomy sludge riff but pop sensibilities. 'Burnout King' is not an easy listen but for those who like their music to have a darker edge and a defined transition between moods and intensity, then this may just be for you.