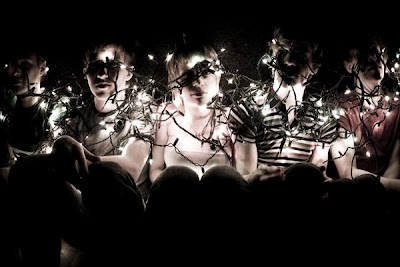 What better way to signal my return to the blogging world than to highlight one of the most exciting and ground breaking UK bands i've heard this year.

That band are Rolo Tomassi.
Coming from Sheffield in the UK, Rolo Tomassi are a five piece led by frontlady Eva Spence. The band's sound is extremly hard to summarize; such is their diversity from anything that might resemble a "genre". Alongside their youthful enthusiam, this happens to be one of the most alluring qualities to the band, they are so different to the mainstream, that their sound stands out even more.
To give you an idea of what the band sounds like, i can hear any number of the following bands when listening to their material. From Sikth, Radiohead, Late Of The Pier, The Mars Volta, Refused, Bring Me The Horizon, At The Drive In, Walls Of Jericho, Enter Shikari, Neurosis, Converge, the list goes on, and no doubt you'll pick out your own influences. There is a clear influence of the Jazz world as well as Progressive music within their material.
One other thing, frontlady Eva Spence. For such an innocent looking young lady she has such a brutal scream that you just can't help be affected by.
Rolo Tomassi's debut album "Hysterics" drops in the UK on 22nd September, and I for one cannot wait!
MP3: Rolo Tomassi - Scabs
MP3: Rolo Tomassi - Film Noir
MP3: Rolo Tomassi - Seagull
Featured Artists MP3's Rolo Tomassi