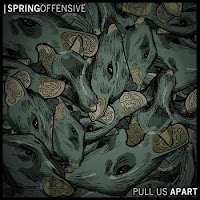 ‘Pull Us Apart’ is a concise seven track slice of avant-garde, angular noodling that says as much with what isn’t played as with what is. The whole mini album is so spacious you could fit a three piece suite in between the notes. It’s indeed brave to be so sparse: Guitars are subject to minimal effects, drums are reverbless and lead vocals are painfully bare.
Spring Offensive also pull no punches in being complex. Songs may feel simple in their entirety, but the hopping single notes of math rock that accompany fidgeting percussions say otherwise. 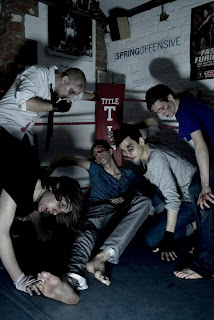 Sure, such math rock intricacies are commonplace these days, but this record has a folk heart beating at its centre, as multi voiced choruses and vocal narratives will contest. This leaves the band sounding something akin to Mumford & Sons or Cherbourg half the time whilst straddling a math-cum-post-rock chasm the rest. Indeed, it’s easy to draw comparisons to gloom-a-likes iLiKETRAiNS, especially as third song ‘Every Coin’ is a (probably accidental) pastiche of the post-rockers single ‘Twenty Five Sins’.
However this jutting, empty style isn’t going to appeal to everyone but it’s clearly where Spring Offensive feel most comfortable. The record seems to grow in confidence as the tracks go on. ‘The Cable Routine’ is a choral chant that twists into a distorted musical scream whilst ‘Everything Other Than This’ is an acoustic, arpeggiated patchwork of gorgeous riffs and vocal melancholy.
Perhaps some will find this album a bit flat or unadventurous, but nothing could be further from the truth. Spring Offensive’s refusal to spoon feed us or adhere math rock clichés is a gamble, but one that pays off. This album bravely challenges what is expected from angular guitar bands and pays dividends to the discerning listener.