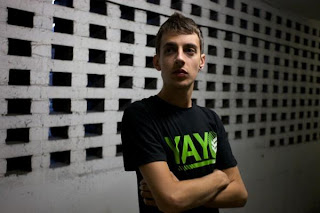 Out this week through Southern Fried Records is "Tru Da City", the debut EP from Brighton based artist Kashii. The four track record encompasses a variety of Electronic styles with the most notable being 2-step, House, and Dubstep. If your into the sort of material Joy Orbison has released over the last few months you'll certainly be into the EP's title track, which is by far my favourite on the record. It has a chilled out beat and floaty bass, which fits perfectly for these long Summer nights with a beer in hand. Kashii makes the sort of music which initially comes off as good for background, but it can actually catch you unaware and all of sudden your head nodding and wanting to throw some moves, with things being totally at forefront in an instant.
There are certainly interesting times ahead for Kashii, he is curently working with vocalists for his second EP with an album to follow. One to watch for sure!
Kashii / Southern Fried Records