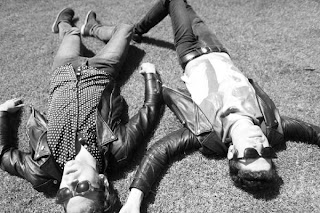 Released last week through Fat Possum Records, "Sleep Forever" is the new single from San Diego duo Crocodiles. Building on from the well received debut LP "Summer Of Hate", this single is the first to be taken from their forthcoming second album due to be released later this year.
The track is a dreamy affair from the outset, with whirling organs and synths littered around the gruff vocals from singer Brandon Welchez. Think a bit of the modern experimental pop (MGMT) with a bit of the past (PiL) and you might get where this duo are headed. If you're not quite convinced then maybe the drop of the producer, a certain James Ford (Half Simian Mobile Disco, producer for Arctic Monkeys, Klaxons et al) may well convince you these guys deserve some attention this Summer.
The band will be hitting the UK in late September/October for a headline tour, full dates on the myspace as per.
Crocodiles // Fat Possum Records // MP3: Crocodiles - Sleep Forever
Crocodiles Fat Possum Jon Sidwell MP3's Single Reviews