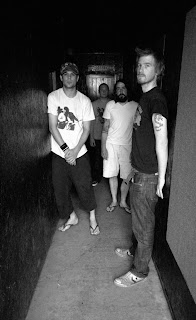 It's hardly surprising that Lonely the Brave's EP is produced by the same guy who worked with Biffy Clyro (Mark Williams); comparisons between the Scottish three piece and 'Backroads' are plentiful. The music is full-bodied, epic and emotive and even the vocals have a hint of Scot about them, despite Lonely the Brave hailing from Cambridge.
Eponymous opener 'Backroads' is chunky wedge of melancholy where fuzzy guitars and husky vocals flow into impossibly gigantic choruses. 'If you be the sky then I'll be the bird' is wailed over booming drums and a sea of distortion. It is – for want of a better phrase – pop rock perfection.
This impressive quality is consistent as the Seafood-esque 'Black Saucers' roars out, bringing even heavier riffs to the table before a dreaded respite: the acoustic cover. 'Backroads' is pointlessly revisited, yet this time minus the swirling distorted magic, making it feel a bit like a magician just has revealed how he's just pulled off his best trick. Needless. 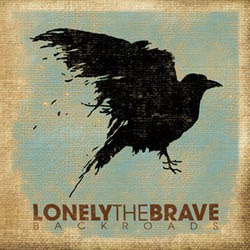 However proceedings soon pick up again with second acoustic number 'Call of Horses', a tune that twists and morphs into a wonderful atmospheric soundscape before finale 'Victory Line' reverts back to type, where brooding guitars and distant vocals sound not dissimilar to another set of Scottish rockers: Idlewild.
It’s all rather brilliant. Ok, so it would be naive to pretend Lonely the Brave haven't consciously written a box ticking, radio friendly EP, but it works. Credit for creating emotional and heavy music whilst avoiding the obvious emo pitfalls; they traverse their chosen field with such expertise they sound like a band five albums in. 'Backroads' is surprisingly fantastic but less surprising will be their meteoric climb to success given the right exposure.
Lonely The Brave // EP released October 4th through Repeater, available online now.
EP Reviews Lonely The Brave Moker Streams