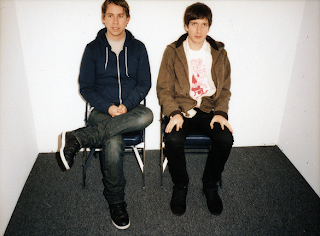 Ahead of the release of their highly anticipated new album, US alternative rock duo No Age have made available it’s lead single ‘Glitter’. Get ready to embrace their new found maturity.
Guitarist Randy Randall and drummer Dean Allen Spunt formed No Age out of demise of their previous hardcore band Wives. They quickly became a prominent part of the LA indie-rock scene, becoming mainstays of renowned all ages and avant-garde venue The Smell. After releasing a collection of their previous recorded highlights through Fat Cat Records in 2007 (entitled ‘Weirdo Rippers’), No Age signed to legendary Seattle indie-label Sup Pop, dropping their acclaimed (proper) debut LP ‘Nouns’ on 2008. With these first releases, Randall and Spunt played a raw and punk heavy version of noise pop – think My Bloody Valentine with slightly more aggression. However, last year’s EP ‘Losing Feeling’ saw this dynamic duo spreading their experimental wings and embracing left field, electronic sampling. 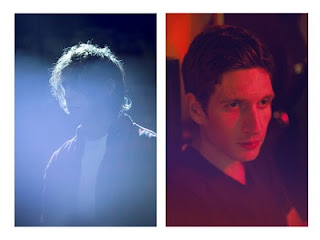 ‘Glitter’ shows No Age progressing even further, not so much in their experimentation, but in their songwriting capability. It may come as an unexpected u-turn for long-term fans, but with ‘Glitter’ the band have released their most accessible track to date. That’s not to say that the duo have recorded a cleanly produced pop-rock song – constant fuzzy guitar noise and intermittent piercing guitar samples are prominent throughout ‘Glitter,’ and this is all backed by further sonic effects and little electronic claps. It is the vocals, however, that will garner the most attention from critics and fans with this release. There is a much more restrained vocal style than anything they have recorded before. Whereas before the vocals had to compete with the noisy guitars to be heard, often being barked out, on ‘Glitter’ the vocals are the dominant force – and this new melodic singing brings a newfound tranquility to the No Age sound. Be sure to grab their new album ‘Everything In Between,’ released next month though Sub Pop. Noise pop perfection.
Buy Glitter single // No Age // Sub Pop
No Age - Glitter by subpop
No Age - Inflorescence by subpop
Clive Rozario No Age Single Reviews Streams Sub Pop