ALBUM OF THE WEEK: THE NOISE FIGURES - APHELION 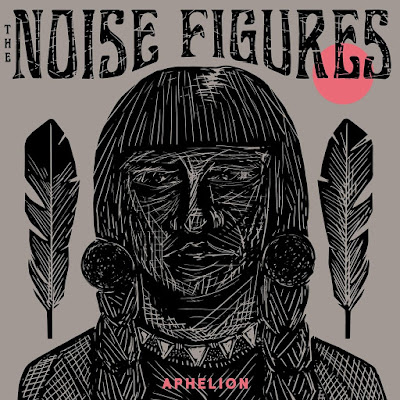 The Noise Figures are George Nikas and Stamos Bamparis, a psychedelic noise rock Greek duo from Athens that are signed to Inner Ear Records. They recently released their 2nd album, the follow up to 2013's self titled debut record. This new one was engineered and produced by Alex Bolpasis in Artracks Studios, recorded over a 5 day period using a reel to reel machine, and apparently tuned to A=432Hz (Pythagorean tuning) which makes everything much better, obviously!

'Aphelion' has 10 tracks and clocks in around the 40 minutes mark, the perfect length of time for the band to show off their clear appreciation for all things engaged with the world of rock music. It's no surprise to see the band name check the likes of Death From Above 1979, Black Sabbath, and Black Angels, as each of their tracks contains a multitude of riffs from George Nikas which sound bleak and totally potent, and there's also a real urgency and intent from the drums of Stamos Bamparis, with the stand out tracks being 'Shoot The Moon' and 'Blood'.

A special mention too for the album artwork which I have a particular fondness for, it's designed by the Bob Studio which has offices in Athens and London, and is a thriving independent design company that work with a whole range of mediums and is well worth checking out if you have such needs.