NEW MUSIC: NOT OF - THE MARK 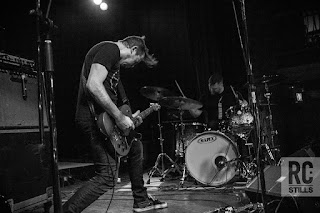 Not Of are a secretive duo from Toronto, comprised of John Ex (Guitar) and Jason Seance (Drums) - which we're told are not their real names. Obviously, we knew that. The band prefer to remain anonymous, if only for a short time, so that their previous musical history can be put aside for their current and future endeavours.

Despite being just the two members, Not Of make a considerably hefty noise which they themselves describe as 'Loud Music. Auxiliary Chaos'. They recently put up a video 'The Mark', a track that comes from their debut record 'Pique' which they put out earlier this year. They put the video together themselves with the help of Divorce, Karl DiPelino, and David Dunham.

According to the band the video "captures the claustrophobia of us compacting ourselves into our cramped rehearsal space — as well as the financial claustrophobia of having no budget. All of which is sorta loosely what “The Mark” is about, but let’s not get carried away here. It makes visual racket, and that’s what really matters.". And that's what matters to us too, as you'll see from the video below the band do indeed make a right old racket, but it does feel like a lot of fun went into putting it all together and that certainly comes out! Not Of are ones to watch for sure.