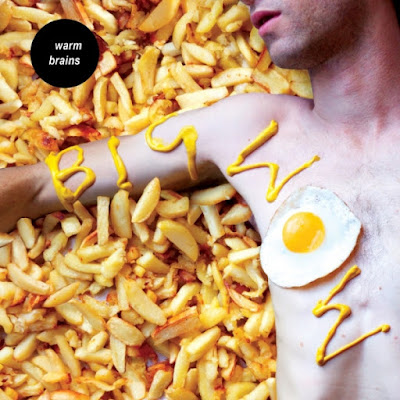 Warm Brains, aka Rory Attwell, has been on our radar since 2004 when he started a band with Dev Hynes (Lightspeed Champion) called Test Icicles, who were a shortlived neo-dance-punk group that released one album 'For Screening Purposes Only' which we absolutely loved and so did many others gathering them a cult following. Since then Attwell has been appeared in various bands and taken on numerous producer roles which have all been reasonably successful but it is his current work under the moniker of Warm Brains that has peaked our interest the most.

'Big Wow' is the second Warm Brains album, following the debut record 'Old Volcanoes' in 2011, and it's available through the Milk Milk Lemonade label. It is a wide ranging album that spans 14 tracks and touches the 45 minute mark. There are clear reference points along the way, most notably 90's brit pop or indie, with the vocals in particular giving off that sort of vague, uninterested style that many of those bands of that time were adept at.

That however is just a smokescreen on this album, with Attwell almost using the vocals to slide his clear song-writing talents under the radar, as his songs offer great melodies, adept anecdotes on life in 2015, and some quite experimental song structures. There's a lot going on and it's fair to say that Big Wow is an album that may require a little work from the listener to unlock its secrets, with multiple listens a probable requirement, but trust us it really is worth it!