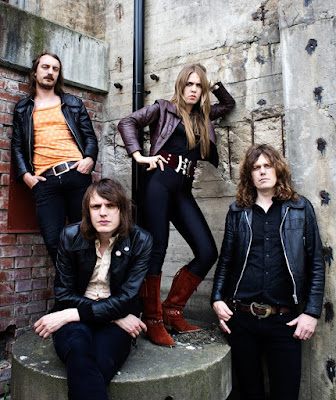 Spiders, from Gothenburg, Sweden, are a 4-piece rock outfit who have been together since 2010. They have two albums Flash Point and Shake Electric which were released on Crusher Records, and this year released the 3-track EP 'Why Don't You'. We were recently invited to catch the band live as they supported the wonderful Uncle Acid and The Deadbeats at London's Scala venue.

Firstly we have to start with the bands attire, which quite frankly we thought was great. Each member dressed in sequins, in purple the two guitarists John Hoyles and Olle Griphammar, and in gold drummer Ricard Harryson and front-woman Ann-Sofie Hoyles. Now to the music, Spiders set is made up of a mixture of new and old material, showcasing their brand of 70's inspired rock with plenty of solos, riffs, and a general altogether appreciation of rock and roll history.

Ann-Sofie Hoyles has a strong voice and good stage presence, and this is what ultimately helps set the band apart from their piers. Whilst some of their songs do lack some originality this is made up by the enthusiasm and passion that is in abundance, and there's also a sense that they are very thankful for the responsive crowd that warmed up to them as their set went on. Spiders will grow their fanbase with their live shows and I'm sure London will welcome them back as soon as they like!