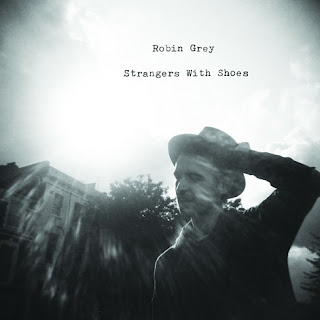 The genre of Folk is a grey area of music for me, with numerous factors affecting my levels of receptiveness at any given point in time. For example I'm much more likely to enjoy folk during the Winter months, in front of the fire, thinking of family and friends, compared to the Summer when its nice and hot, and I want to put on some uplifting Drum and Bass. That being said there is a small list of Folk artists (namely The Swell Season, Laura Marling, Mumford And Sons) who make my ipod playlist all year round. Hoping to join the list is London's Robin Grey, with his sophomore album Strangers With Shoes.
Opening with "Younger Looking Skin", we are quickly introduced us to Robin's soft vocals, which although not hitting the high notes does possess a certain level of depth. This depth makes it easy to connect with what he is trying to say through his lyrics, which is important because his vocals are what really takes him above his piers. His every day commentary of normal life inject a refreshing shot of energy into a genre which can sometimes get bogged down with too much heavy emotion and feelings.
Although a one man recording artist in his self confessed "small white room with a blue door" in sleepy Hackney, Grey has wisely enlisted the help of several musicians to assist him in producing this album. Most notably female backing vocals which always seem to add an extra layer of substance when getting a point across, particularly on "Till Dawn" and "Shakes & Shudders". 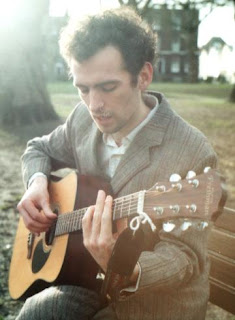 "Ninety Days" is the stand out track on the album for me, with Grey combining Folk with Blues, as well as tackling a tough topic of relationship breakups. The lyrics are bleak yet honest, and the simple line of "yeah, well fuck you" resonates with you throughout the day. Coupled with that the slow and moody nature of the piano and drums, you are left with a song which is near faultless.
Despite Robin Grey producing a superb second album, it unfortunately may still go unnoticed this year, as it is swept aside by artists with big budget PR campaigns and those who are matey with radio DJ's and alike. However there will be at least one last.fm account with the album high in the play charts come the end of the year, as Strangers In Shoes is about to enjoy an extended residency on my ipod play list this year.
Robin Grey /// Purchase Strangers In Shoes
MP3: Robin Grey - I Love Leonard Cohen
MP3: Robin Grey - Ninety Days
Album Review MP3's Robin Grey