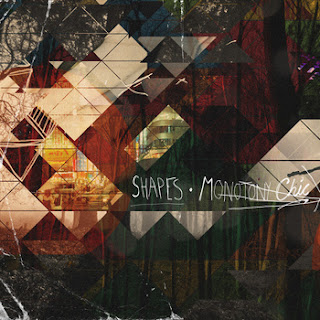 Shapes’ album ‘Monotony Chic’ is so fine that even when pressing myself to fault it I failed. The standard production complaints of a record like this – that its rawness comes across as untidy and unprofessional, or that it’s slick sound is too polished for a hardcore release – are muted by the fact that its sound is pitched at a perfect balance between DIY roughness and high quality accomplishment, veteran-style. It really is absurd to learn that this is Shapes’ debut album. Of course, they have been touring a fair while (having formed in 2008 in Birmingham), and have two acclaimed EPs under their belt, but this album really is a step up – not doubt aided by having Eskil Lovstrom on to handle production (you know, that guy who worked on Refused’s ‘The Shape Of Punk To Come’ – the standard by which all hardcore albums are judged by). 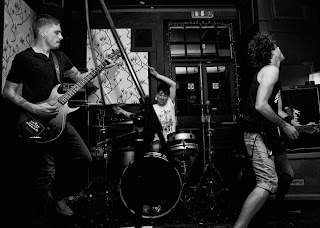 The music Shapes make is a blend of post-hardcore and mathcore – combining the best of both genres to make a noise (a noisy noise!) that resembles early Every Time I Die, The Bled at their most progressive, and Glassjaw at their heaviest. For the most part, Steven Bachelor’s vocals are scream-heavy – displayed very well on ‘Magister Navis’ and ‘Lipstick Vulture’ – and there is a punk passion in his emotive-yet-hysterical screams reminiscent of Frank Carter from Gallows (Surely he’ll just rejoin Gallows. Surely they can’t replace him. Surely…). However, Bachelor also has a pretty decent singing voice – his croon slash whine adds some much welcomed melody to the frenetic music. You can even trace a little soul in his clean vocals on ‘Allure A Hore’. These sporadic melodious interludes, together with the quieter musical moments, add the post-hardcore Glassjaw vibe to the record, particularly on standout track 'Vacancy Ape’.
This is an urgent and intense collection of songs worthy of your time. And time is something it may need, as ‘Monotony Chic’ does take a couple listens for the tunes to sink in. It may sound a little erratic and messy at first, but there is real precision here, and it may only be on the third listen that you begin to distinguish between riffs (and man are some of the riffs nice!), screams, and time signatures. The heavier aspects of the album have enough quality to allow Shapes to mingle with other Brit punishers Pulled Apart By Horses, and enough punk-rock venom to rival The Computers’ raw ‘This Is The Computers’ release. But in terms of Glassjaw grooves and melodies, Shapes have a way to go before they will be able to compete with letlive. (their ‘Fake History’ album – rereleased this year – was the best post-hardcore album of the last few years).

Nonetheless, fans of progressive hardcore music should check this out without hesitation.
Monotony Chic is out now through Big Scary Monsters. // Shapes
Shapes - Vacancy Ape by Music Liberation