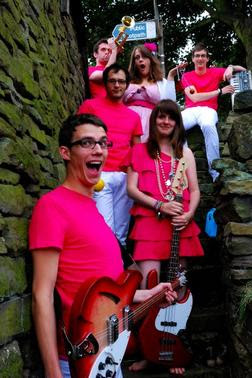 Having recently toured with Music Liberation favs Stars And Sons, Sheffield based Screaming Maldini were guaranteed to get some generous ear time upon us receiving their debut EP "And The Kookaburra". It was released late last month through the excellent Alcopop Records, home to the likes of the aforementioned Star And Sons as well as Stagecoach and 4 or 5 Magicians.
As you can see the promo pic we were sent automatically steers you in the direction and nature of this band. Pop. But this is clever pop, with each of Screaming Maldini's 6 members contributing fully not just making up the numbers and fading into the background. This EP is incredibly varied, with each track being different from the next, demonstrating not only the versatility of this band but also the vast amount of artistic flair and ideas they must have.
"Secret Sounds" opens up the EP with overblown vocals, triangles, and off beat drums, with clear a nod in the direction of Liverpool's The Wombats (vocally speaking at least). Completely different to everything else on this record is "The Albatross" which shows the band's versatility with vocals with this one being entirely female led, compared to others being male led. It is my favourite song on the album, with the band tugging on the emotions as they build the song up to its climax. The record finishes with "Miniatures" which begins with a fast tempo, has a middle of reggae-ness and finishes with some sort of post-rock crazyness, all complete with group vocals and the general feeling that this band could do so much more on a full length offering.
Screaming Maldini's debut EP "And The Kookaburra" is out now through Alcopop Records.
Screaming Maldini /// Alcopop /// Buy EP
MP3: Screaming Maldini - The Extraordinary
Alcopop EP Reviews MP3's Screaming Maldini