Single Review : The Suzukis - Built In 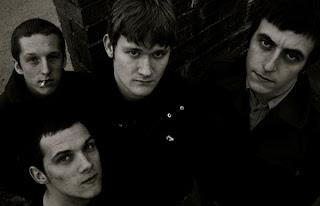 Wigan four piece The Suzukis have apparently been causing a bit of a stir with their own take on the whole post-hardcore punk thing, probably because they sound more like American East Coast rockers from the 80s than any band from Wigan – They’re hardly similar to The Verve or (thankfully) Starsailor.
Their single ‘Built In’ is a no nonsense punk song with sparse verses that are pushed along by some creative interaction between a roaming bass and pounding drum kit, before it’s all rudely interrupted by a shouty anthemic chorus full of distorted guitars.
It’s all rather good to be honest. But the thing is, it’s also a bit of history repeating. The Suzukis are more than a little Fugazi-esque and whilst this is no bad thing in itself, it would be nice to hear their own musical take on things rather than coming across as a mere carbon copy of what went before.
There’s little doubt that singer Chris Veasey delivers the goods, supported when necessary by shouting backing vox and the whole song is a thundering tip of the hat to the past, but because of this the music can feel tried and tested, and dare I say it, obvious. Still like Ronseal, it does what it says on the tin and you can’t knock ‘em for pounding out what are essentially complete and well executed punk numbers. Good for them. Worth a listen.
The Suzukis Myspace /// Deltasonic Records /// MP3: The Suzukis - Built In
Moker MP3's Single Reviews The Suzukis