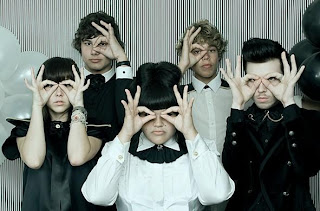 Formed in 2005 while at school, these young Aussie pop-rockers stormed the charts in 2007 with that annoying infectious single ‘Just A Song About Ping Pong.’ Soon after, they released their debut album ‘Yes, Yes, Vindictive’ and won an AIRA award for Best Newcomer Single (the Australian equivalent of the BRITs). However, it's been awfully quiet over in the Operator Please camp recently, ever since departed member Sarah Gardiner popped up all over the internet flashing her naughty bits for a soft-core porn site. 2010 marks their return, post porn scandal and with a new sound and edgier look.
‘Logic’ is the first single released from their upcoming sophomore album ‘Gloves,’ and it sees them dilute their angular-guitar driven pop-rock in order to pursue a funky, electro-rock sound. Doesn’t this all sound a bit familiar? Ah yes, didn’t Yeah Yeah Yeahs just do exactly the same thing? With jagged riffs and howling female vocals it’s hard to ignore the influence of Karen O and gang, especially now they have also decided to experiment with a more dance-orientated sound.
‘Logic’ starts with an addictive, funky bass line with a spiky, indie riff that comes in after the first verse. Then comes the chorus – a fantastically catchy pop refrain sung by Amanda Wilkinson, backed with piercing, swirling strings courtesy of violinist Taylor Henderson. It may not come packed with the same urgency and energy that their older material possessed, but this new funky direction is a great deal more memorable than the substandard, artsy indie-rock that they initially surfaced with. If the rest of upcoming album follows this new formula they may well be onto a winner (I say winner, but they will always come in at second place to Yeah Yeah Yeahs).
Operator Please Myspace /// MP3: Operator Please - Logic
Clive Rozario MP3's Operator Please Single Reviews