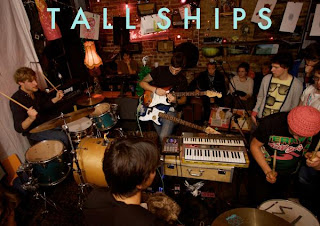 Originally based in Falmouth, but now living in Brighton (an apparent mecca for new music these days) comes Tall Ships. Today see's this 3-piece (Ric Phethean, Matt Parker, and Jamie Bush) release their debut selt titled EP through a split collaboration between Big Scary Monsters and Blood And Biscuits. Having recently returned from their first UK tour supporting Tubelord, as well as gaining much kudos from new music general Huw Stephens, and (ahem!) rag NME, this young band are steadily gaining the hype factor. This EP is therefore a pretty important release that could really propel the band onto the next level.
The record opens up with "Books", which has a slow start of elongated synths and soft drums, before the synths take centre stage and drive the song along. It is almost two minutes before we are introduced to the vocals of Ric Phethean, which although not being dominating do fit the song very well. Apart from some vocal clips (possibly from films) the next two songs on the EP, "Words Are Pegs Upon Which We Hang Ideas" and "Beanieandodger" do not have vocals from the band themselves. Which opens up the floor for Tall Ships to showcase their high musicianship qualities, as well as taking the listener on a journey through various repeated synths, guitars, and drum patterns. It is a real sign of the band's quality when they can almost create melodies, and emotional reactions through the power of their various instruments.
The record finishes with "Vessels" which brings together the instrumental rhythms from the previous two tracks as well as adding group vocals, to create a track which demonstrates both talent and ideas way beyond the tender years of this band. For comparisons you could loosely look at progressive bands such as Foals, Late Of The Pier, and The Murder Of Rosa Luxemburg, but Tall Ships deserve more than to be bandied amongst others such is the strength of their ideas and music. This taster of the bands potential will be followed by a second EP due around the Autumn, as well as more UK touring in the Spring.
BUY EP on iTunes /// Tall Ships Myspace /// Big Scary Monsters /// Blood And Biscuits
MP3: Tall Ships - Books
EP Reviews MP3's Tall Ships